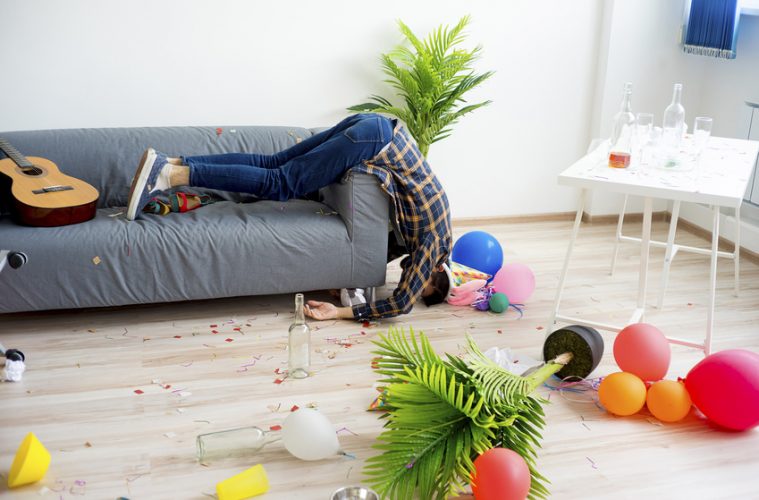 The morning after drinking, you’ll often wake up feeling a little worse for wear. However, this doesn’t have to be the case. While a hangover isn’t entirely preventable, there are certain ways to alleviate the symptoms and reduce the duration.

Alcohol inhibits the hormone vasopressin, which helps your kidneys to reabsorb fluid and prevents you from urinating. Because of this, alcohol is incredibly dehydrating. When vasopressin is inhibited, you end up needing the toilet more and losing more water.

While this may not feel like a big deal during the evening, you’re guaranteed to wake up with a hangover in the morning.

Drinking water before bed will not prevent dehydration, it will certainly reduce the severity.

While dehydration plays a part in a hangover, it isn’t the only cause.

When alcohol is broken down by the liver, toxic by-products known as “free radicals” are produced. Normally, the body uses antioxidants to clear up the free radicals before they become a problem; however, drinking causes the body to become overworked and exhausted, meaning there is little energy left for the antioxidants to do their job. When these toxins cannot be cleared, they build up in the body and result in a hangover.

Thankfully, there are certain drinks that can reduce the severity and duration of a hangover. As there are two factors to a hangover, there are two different types of hangover drinks: those that reduce dehydration, and those that help the body to clear the toxic by-products.

In this article, we explore some of the best hangover drinks that can help to make you feel better the morning after.

While nothing can prevent a hangover completely, some drinks can reduce the symptoms and duration. These drinks provide relief from alcohol after-effects by reducing or inhibiting the effects of alcohol on the body.

For best results, you’ll need to consume these drinks early before the hangover sets in. 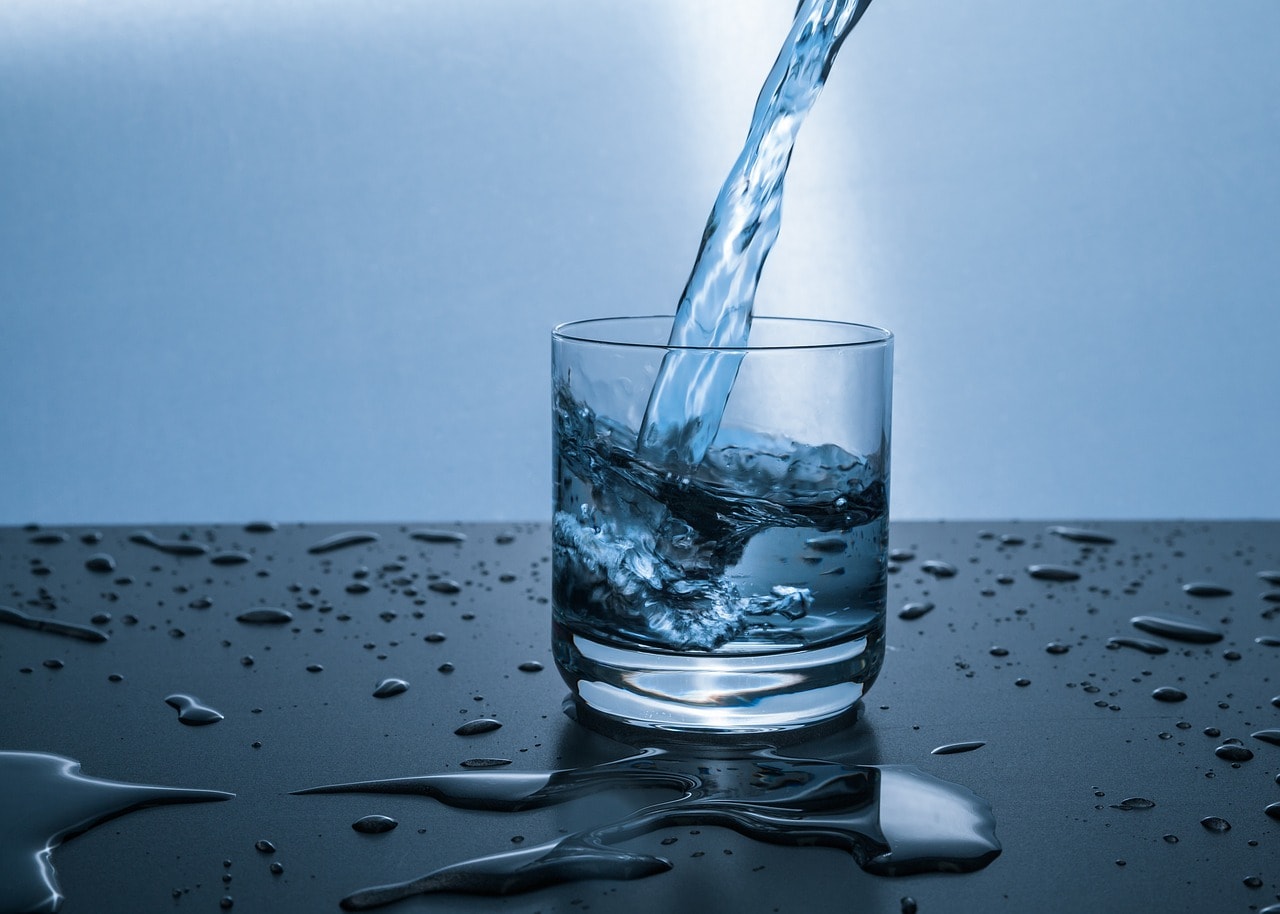 The first hangover drink is plain H2O. When drinking, water should be your first line of defense. This is because it slows the effects of the alcohol, meaning you’ll get less intoxicated and feel less hungover in the morning.

To keep your kidneys working the way they should be, you’ll need to drink one glass of water for every alcoholic drink you consume. The next morning, continue to drink water to make up for all the fluid you have lost. Although copious amounts of water will make you need the bathroom, it will rehydrate your body and reduce the duration of your hangover.

If you’re looking for a hangover drink with a difference, Morning Recovery may appeal to you.

As well as rehydrating the body, the hangover supplement helps to break down the alcohol toxins and flush them out of the body. The drink also helps to boost liver function, replenish lost nutrients, and speed up your recovery.

While most hangover supplements contain DHM, Morning Recovery claim that theirs is superior to other products on the market. Claiming that “not all DHM is created equal”, the company suggest that their product will leave you feeling energized and productive the day after drinking.

See our full review of Morning Recovery here (we tested it out).

If a hangover leaves you feeling nauseous, it can be difficult to keep solid food down. In this case, sipping bone broth is your best bet.

Essentially, bone broth is the liquid from simmered-down animal bones, tendons, skin, ligaments, feet, and marrow. While this sounds less than appealing, it provides the necessary nutrients to build the body back up, such as magnesium, phosphorus, and calcium.

Dioralyte is a medical-grade drink designed to rehydrate the body after a bout of diarrhea. Interestingly, it can also be helpful during a hangover.

The drink contains the perfect amount of carbohydrates and electrolytes to replace the fluid lost through drinking. While it’s similar to sports drinks, Dioralyte has more electrolytes and less sugar. For best results, down a glass of Dioralyte before bed and another the morning after.

Coffee certainly isn’t the top hangover cure, but it does reduce some of the unpleasant symptoms. After a night of heavy drinking, you’re likely to feel sleepy the next day.

As caffeine is one of the best remedies for this, a cup of coffee can leave you feeling more alert. Additionally, coffee increases the level of dopamine in the blood – the hormone that boosts mood and produces a feeling of calm. If you experience irritability and low mood during a hangover, coffee may be the best hangover cure to reduce the symptoms.

Coffee can also alleviate the headaches caused by alcohol consumption. Just one cup of coffee can reduce adenosine in the body, a chemical that causes headaches after intoxication.

If you’re a regular coffee drinker, drinking coffee after an alcohol binge is even more important. If your body is used to the caffeine, caffeine withdrawal may worsen your hangover symptoms.

As mentioned previously, alcohol releases toxins and depletes antioxidants. Drinking coconut water after drinking will replenish the antioxidants and help the body to mop up the toxic by-products.

If you experience diarrhea after alcohol, drinking coconut water is even more important. One glass of coconut water contains enough potassium to replace the volume lost during an upset stomach.

As potassium deficiency causes symptoms such as fatigue, replenishing your potassium levels may alleviate the hangover.

This coconut green smoothie can hydrate the body and replenish all the lost vitamin C, potassium, fiber, natural sugar, and antioxidants. To make the smoothie, all you’ll need is 1 banana, 1 cup of unsweetened Greek yogurt, a handful of beet greens, 1 tablespoon coconut oil, ½ cup strawberries, ½ cup coconut water, and ice.

Simply chuck all the ingredients into a blender and enjoy! For best results, don’t forget to include coconut oil. Adding fat to the greens helps you to absorb their nutrients.

Binge drinking can create free radicals. Not only can these create a hangover, but they can also increase your risk of disease.

Thankfully, the beta-carotene found in carrots can help to mop up the free radicals and prevent nasty side effects. Ginger boasts anti-inflammatory compounds that can alleviate nausea, and apples are a great source of vitamin C! Throw the three ingredients into a blender along with a liquid of your choice. 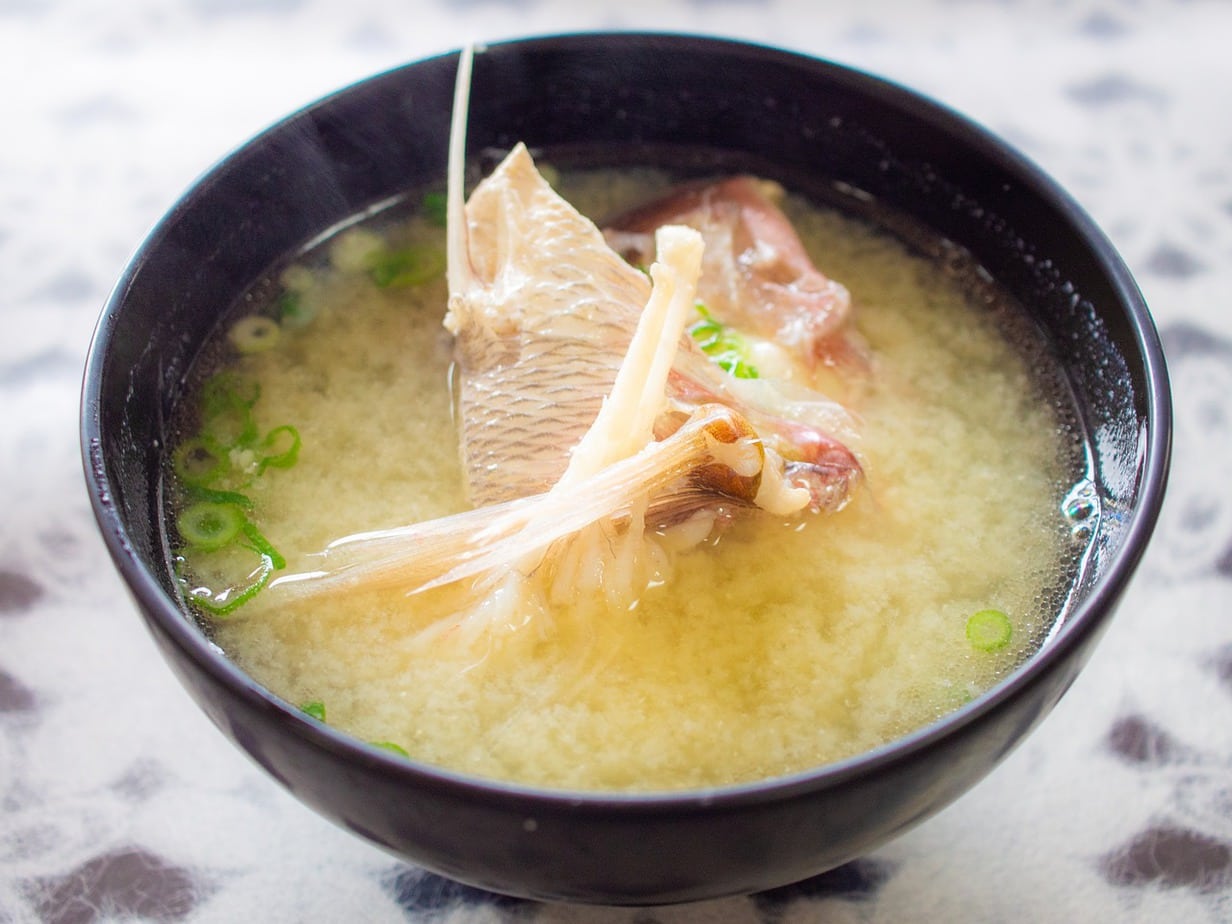 Alcohol intoxication depletes sodium, an important electrolyte in the body. Sodium is required for fluid balance and nerve and muscle function, so replacing it after drinking is important! Miso (fermented soybean) contains just the right amount of sodium and also contains antioxidants and probiotics that can soothe digestion.

With that in mind, miso soup is ideal for those who have tummy troubles after drinking.

Virgin Mary is a non-alcoholic version of the Bloody Mary cocktail. The hangover cocktail is made with tomato juice, Worcestershire sauce, Tabasco, and lemon juice. If you usually benefit from a hair of the dog, add in a dash of vodka, too.

Tomato juice contains high levels of the antioxidant lycopene, which alleviates hangover symptoms by mopping up the toxic by-products. Tomato juice also contains potassium and sodium, which replaces the electrolytes lost during a night on the town.

Worcestershire sauce contains a large amount of B-vitamins – which help digestion – as well as garlic, molasses, and anchovies that help clear toxic chemicals from the liver. The lemon juice in the drink serves as a natural laxative, aiding digestion and soothing the abdominal discomfort that comes with alcohol binging. 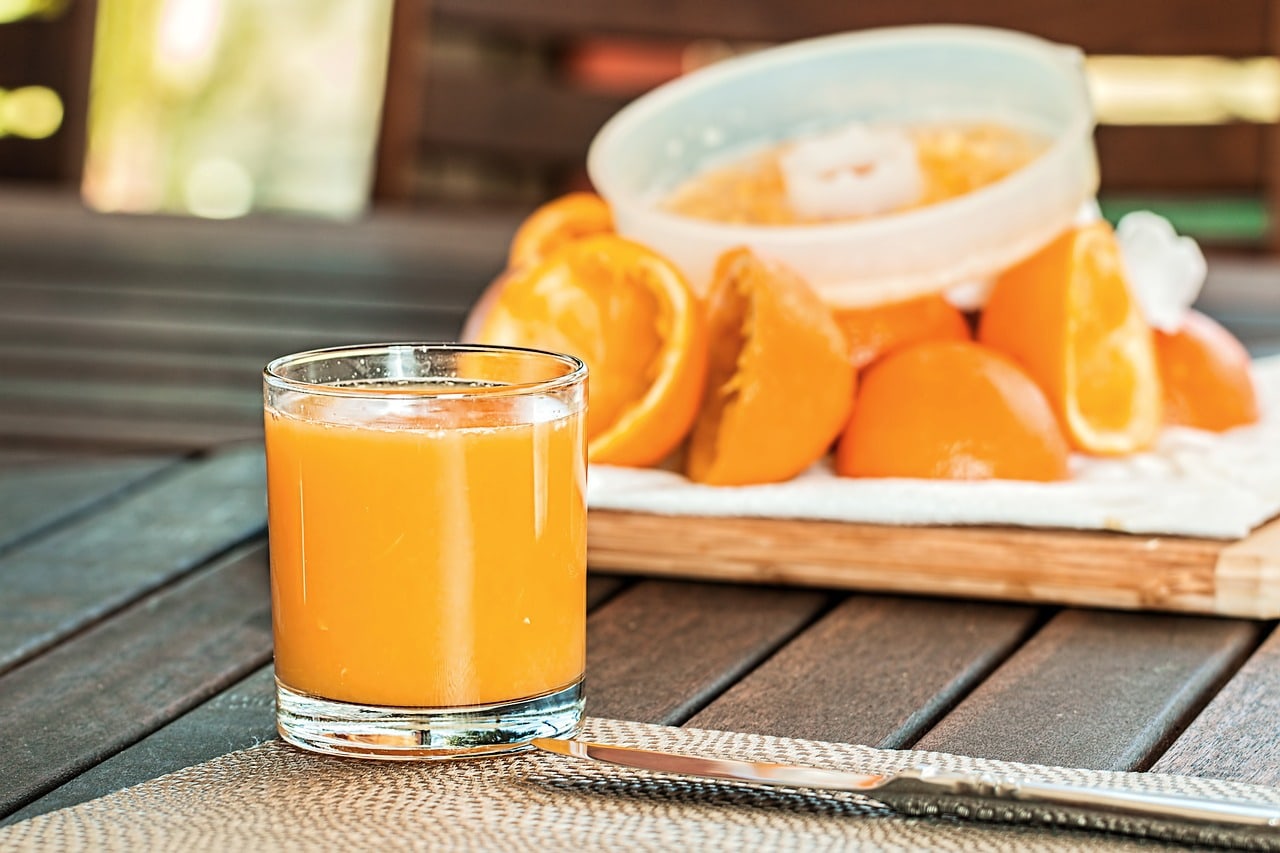 When drinking alcohol, the body’s vitamin C stores are depleted. As the vitamin acts as an antioxidant and supports immunity, it’s important to replace it ASAP.

The antioxidants in orange juice help to mop up the free radicals before they wreak havoc on your insides. Vitamin C also helps you to produce collagen, the protein that makes your skin look young and plump.

With this in mind, a glass of orange juice can also revitalize tired skin after drinking. As drinking alcohol also causes low blood sugar, you may experience sugar cravings with a hangover. Thankfully, orange juice will replace the natural sugar and provide a much-needed energy boost.

Beetroot pineapple juice is another great hangover drink. After alcohol consumption, the liver is put under stress to cleanse the body. Beetroot contains betaine, an antioxidant with powerful anti-inflammatory properties. This can reduce liver inflammation and improve its efficiency. Adding pineapple to the drink adds flavor and provides a dose of vitamin C.

Ginger tea contains active phenol compounds such as gingerols and shogaols, which aid digestion and reduce tummy upset. If you experience abdominal discomfort after drinking, ginger tea may help. The tea can also reduce nausea and vomiting.

Lavender tea produces a feeling of calmness as it sends feel-good signals to the brain. The tea can also relieve tight muscles and joints, helping to cure the muscle aches and joint pains associated with alcohol consumption.

As fennel tea has antispasmodic effects, it can alleviate muscle aches the day after drinking. Some people believe that it provides similar pain relief to ibuprofen.

Chamomile tea is one of the oldest hangover drinks. Today, it remains one of the best drinks for alleviating alcohol withdrawal symptoms.

The tea also contains flavonoids and terpenoids, which have a sedative effect on the body. If you struggle to sleep after drinking, a cup of chamomile tea may help you out! The tea also relieves muscle pain, anxiety, and stomach upset. 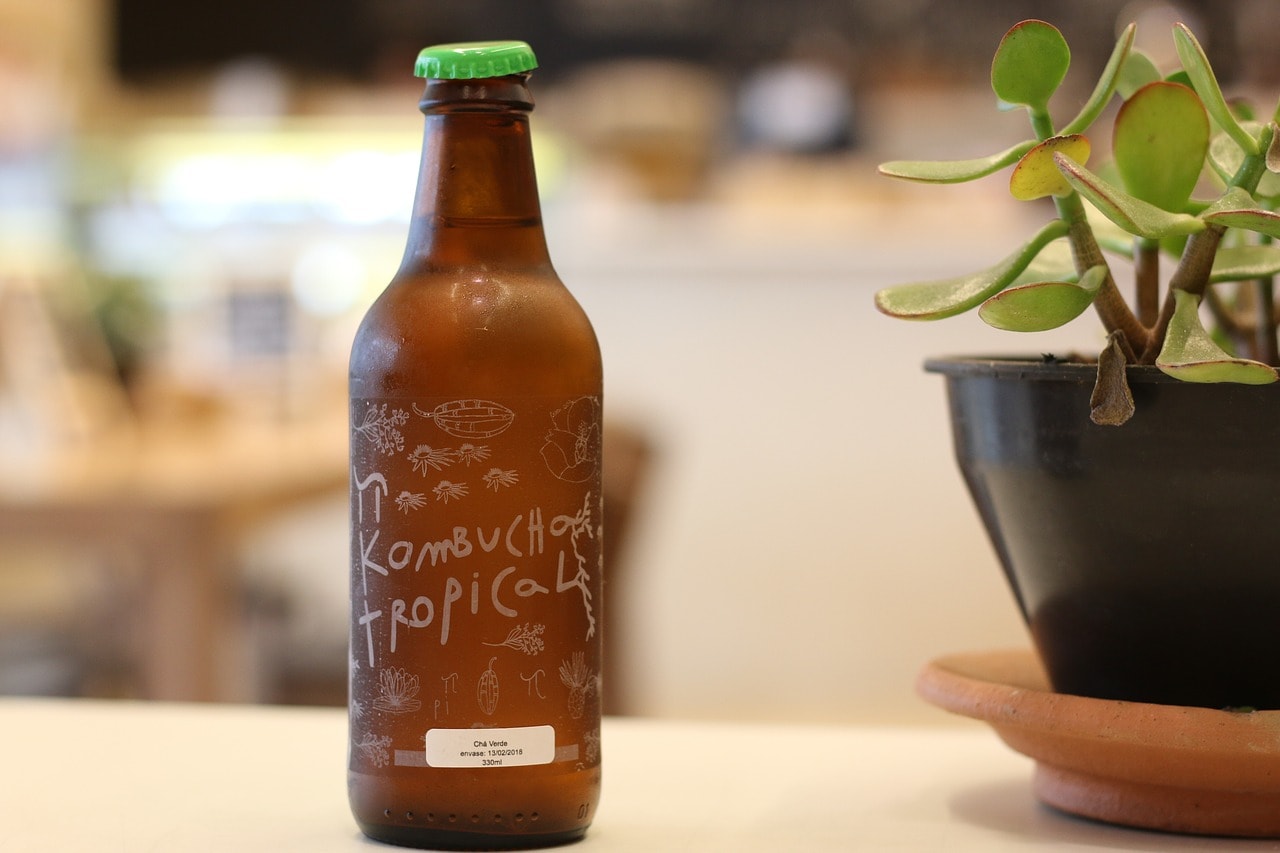 Kombucha tea is also excellent for a hangover. The tea is high in antioxidants that cleanse the toxins from alcohol breakdown. The drink also contains bacteria that can alleviate stomach problems associated with heavy drinking.

The final tea on the list in ginger lemon. Ginger helps to alleviate nausea while lemon supports the liver. For best results, we recommend making the tea from scratch. To do this, boil some water and add fresh slices of ginger and the juice of half a lemon. Leave to cool and enjoy!