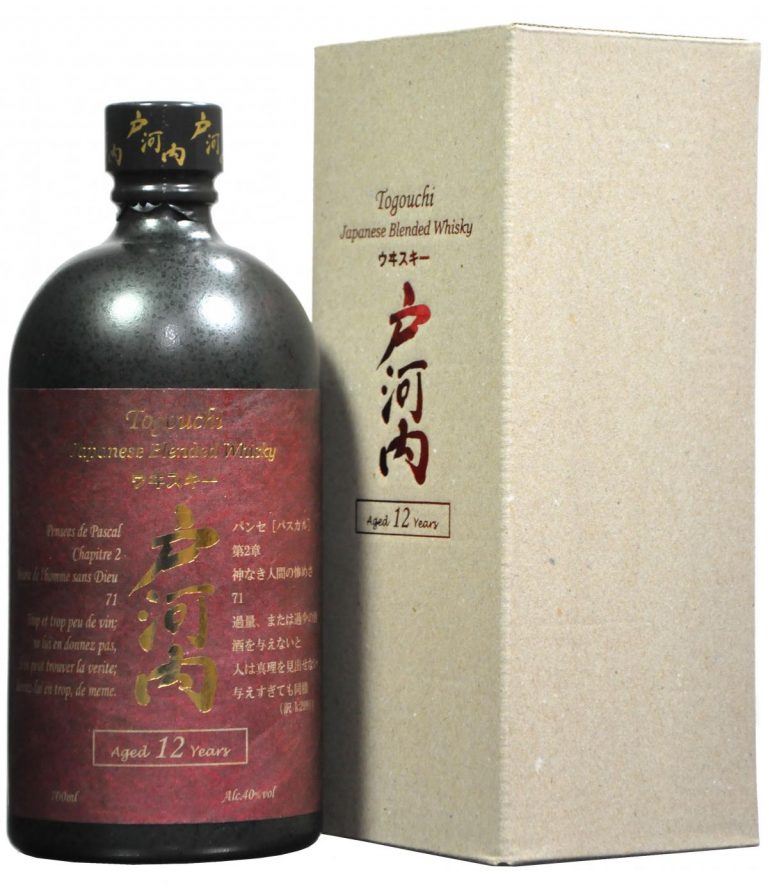 This one can be quite divisive for a Whisky and despite that there is little to be found on it in terms of the usual hype / discussion or commentary.

Togouchi is a brand of Whiskey that’s produced by Chugoku Jozo and if you try and research it you’re likely to find out, before much else, that it’s maturation process happens in an old train tunnel which with a constant temperature of 14°C and a humidity of 80 %, is pretty perfect for Chugoku Jozo’s needs.

So why does this rather interesting story end with such division between Whisky aficionados? Quite simply it’s because it’s not, at its heart, a Japanese Whisky. The distilled Malt is imported from Scotland and Distilled Grain from Canada. Only the blending and maturation happen in that tunnel deep in the mountains of Japan’s Nishi Chugoku Sanchi region.

Truly an International effort then but how does it do in the most important test?

Appearance: Slightly weak in look, edging towards the Straw side of the scale. Good strong leg.

Nose: Quite harsh with a chemical note, lingering smoke – lightens up with water.

Palate: Citrus, zesty and fresh. Quite a departure from the nose and a pleasant surprise. Feels good on the tongue. Doesn’t linger but makes you want more.

Summary:
At first I was quite shocked at the harsh notes that came from the nose on pouring, normally with something so chemical like you are going to feel it later on.

It was a very pleasant surprise then that this mellowed out with time in the glass but the addition of a splash of water made it even better. I’d go as far as saying that regardless of palette you’re going to enjoy this Whisky more with some water, even if you don’t normally dabble in such things. It’s a divisive whisky anyway so why not go full hog and add half a teaspoon of water.

With the pleasant feel in the mouth and doesn’t linger too long, you can really drink this Whisky.

For me it leaves me a little in turmoil but perhaps not for the same reasons that others are finding it.

I just struggle to think when I’d actually recommend it over others available. Certainly not to someone who wants to try a Japanese Whisky because, as we’ve been through, it can’t be called such in the purest way.

So as a whisky on its own then? Well it’s a bit pricey for what you get. The price band it’s in can get you an awful lot in whatever floats your boat. In some cases, you could get 2 bottles of a very good Whisky.

I’d quite happily sit and enjoy a Togouchi 12YO no problem if it was handed to me but I don’t see a situation where I’d ever buy it with my own money.

Have a read of more Japanese whisky reviews: https://whiskeybon.com/japanese/