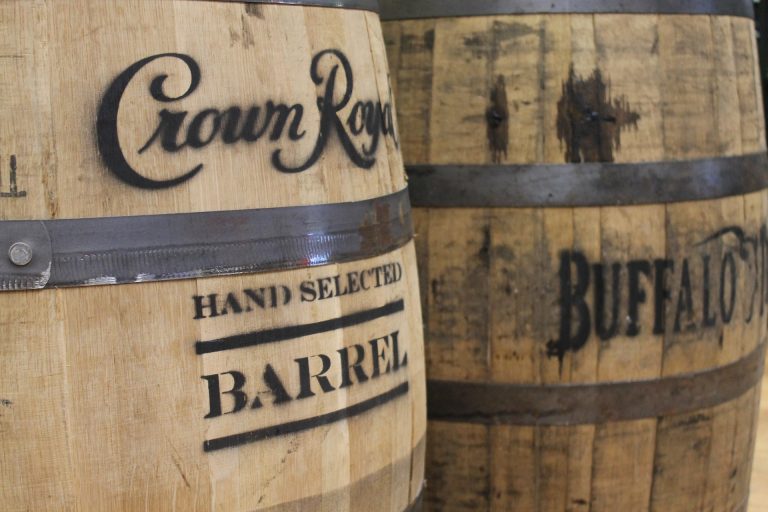 Canadian whiskey can sometimes suffer from a lack of brand recognition, without the global appeal and popularity of more famed whiskey producing nations such as Scotland and America, but there are exceptions, and chief among those is Crown Royal.

True to its regal name, Crown Royal was first introduced in 1939, to serve as a commemoration of the royal tour of King George VI and Queen Elizabeth.

Initially only available in Canada, it has been widely available in the US since the 1960s, and enjoys tremendous popularity, especially for mixed drinks, with its palate of berry fruits, vanilla sweetness, and oak spice making it a versatile and appealing base spirit.

The Sweet With The Bitter: Crown Royal Sour

When it comes to mixed drinks, few are as ubiquitous as the Whiskey sour, so much so that it even has its own official definition as outlined by the International Bartender’s Association, but that doesn’t mean we can’t have some fun with it!

In the spirit of honoring the Crown Royal, we have a Canadian twist on the classic whiskey sour, one where the usual simple syrup is substituted for decadent maple syrup, which adds its own irreplaceable unctuous sweetness to the mix.

A Signature Fit For A King: The Crown Highball

Throughout the 20th century, few mixed drinks had the name recognition of the Highball, and this simple classic is still enduringly popular to this day. But the key is finding the right whiskey, you don’t want that three-figure bottle of Scotch or Pappy Van Winkle going into such an everyday sipper, but you also want flavor and not alcohol burn.

This is where the subtle but defined taste of Crown Royal makes for a perfect companion.

To make a Crown Royal whiskey highball, combine 1 part Crown Royal Canadian whiskey with 2 parts unflavoured soda water in a glass containing ice, stir gently, and serve with a lime wedge over the side as a garnish, or in the glass itself for an extra citrus hit.

We’re going to update a classic here, with an underrated whisky in Crown Royal, and a definite love it or hate it mixer in cherry coke.

The flavor can be divisive, but if you like cherries and sweetness, this is a surefire hit for you. And that extra mellowness and fruit notes brought forward by the Crown Royal really compliment the cherry Coke.

To create your Crown Royal Canadian whiskey and Cherry Coke mixed drink, simply add 1 part Crown Royal and 2 parts Cherry Coke to a glass over ice and stir gently and of course, garnish with a Maraschino cherry if you want a little bit of an extra flourish to your mixed drink!

Vanilla, Ginger Beer, Lime, Whiskey. Four flavors, one mixer, and a truly iconic mix that simply can’t be beaten for a refreshing and delicious summer mixer.

We’ve given you two different ways of doing this, depending on whether you want more of a diner flavor with vanilla extract or a cocktail bar style with Crown Royal Vanilla Flavoured Whiskey.

If using a flavored whiskey, simply pour 1 part Crown Royal Vanilla Whiskey and 2 parts ginger beer into a glass over ice, before squeezing the juice of one fresh lime over the top.

If using unflavoured Crown Royal whiskey, follow the process as above, but add a dash of either vanilla extract or vanilla-flavored bitters at the end and lightly stir in.

If you ask us, this should be a more commonly utilized combination for all whiskeys, but especially for Crown Royal, whose sweet fruity vanilla flavors make it the ideal counterpoint for that most wonderful of summertime delights—cold brew coffee.

You can either buy it pre-made or if you’re a bit of a home barista, make your own. And be sure to add sugar to the cold brew to sweeten depending on your personal tastes. 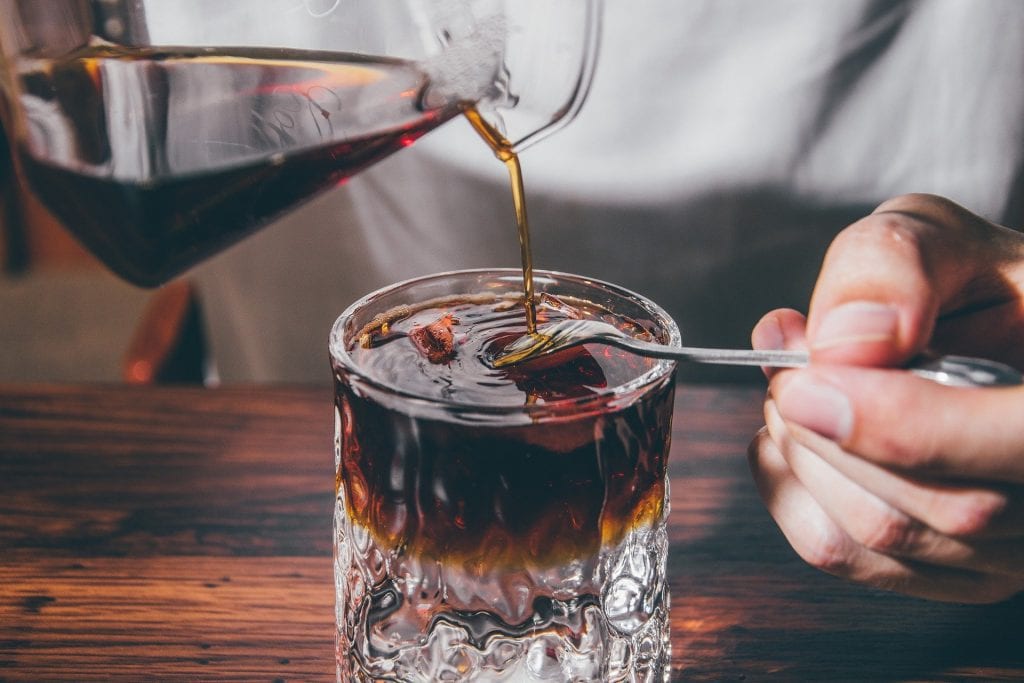 To make a cold brew and crown royal mixer, pour 1 part Crown Royal Whiskey to 2 parts Cold Brew coffee over a highball glass loaded with ice, and then stir and serve. For an optional garnish, you can also add whipped cream and caramel syrup, for your very own special Starbucksesque treat.

Nothing evokes such strong feelings of nostalgia and childlike delight quite like the orange cream soda, with its creamy vanilla sweetness and bursts of fruit flavor. So, it goes without saying that it makes a fantastic mixer alongside Crown Royal Canadian Whiskey.

We can break free from convention with this one, no longer burdened by the classic iced tea and bourbon pairings, we’re free to create something that’s bursting with sweet ice tea flavors, and complemented by a garnish of fresh strawberries and mint.

To make this Crown Royal And iced tea mixed drink, combine 2 parts Crown Royal Canadian whiskey 1 part freshly squeezed lemon juice, and 1 part simple syrup in a cocktail shaker. Strain into a glass over ice, and top with iced tea, before garnishing with a skewer of fresh strawberries and mint.

A Whiskey Take On A Tequila Classic: Crown Royal & Grapefruit 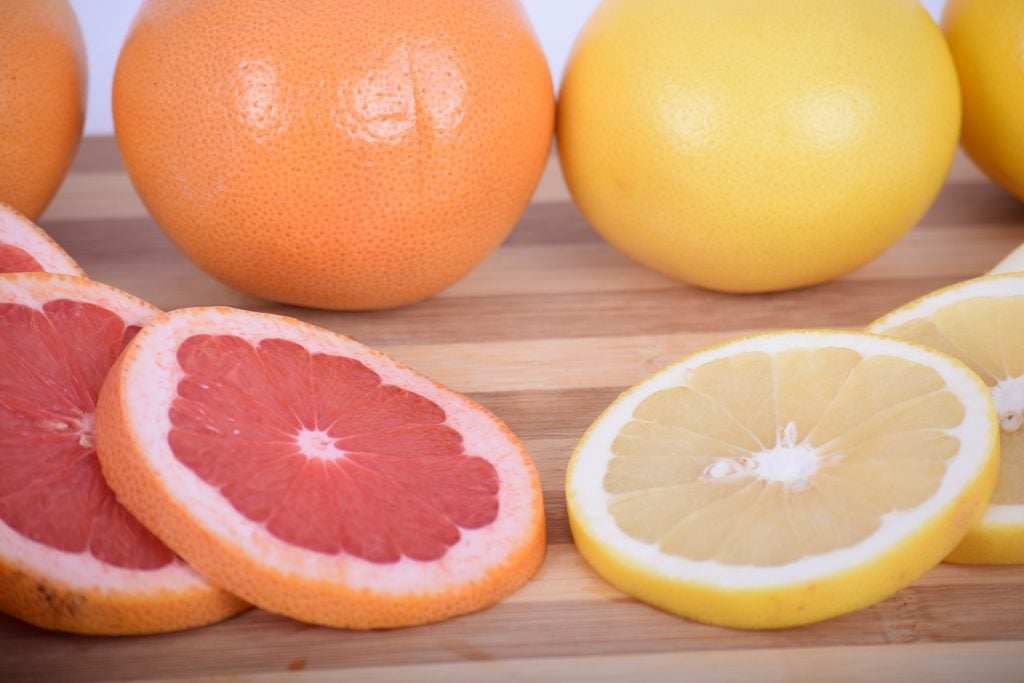 The Paloma is an iconic mixed drink, the tropical answer to an old-fashioned, it is usually made with Tequilla or Mezcal accompanied by a dash of fresh lime and a long-serving of delicious grapefruit soda.

This classic highball pairing of sweet and sour lends itself perfectly to a Crown Royal mixed drink, where the Tequilla is substituted for Crown Royal Canadian Whiskey.

To make your Crown Royal and grapefruit mixed drink, pour 1 part bourbon and a dash of Angostura bitters over a highball glass with ice, and then pour 2 parts of your preferred choice of grapefruit soda, before adding a squeeze of fresh lemon or lime juice, and stirring gently.

When looking for mixer combinations, you can learn a lot from the most popular flavored drinks for particular whiskey brands, and in the case of Crown Royal, the runaway favorite is undoubtedly Crown Royal apple. And it’s that combination we’re channeling here, with our combination of Crown Royal Canadian Whiskey and apple juice.

We recommend using a nice organic apple juice, to really get the most out of your mixed drink.