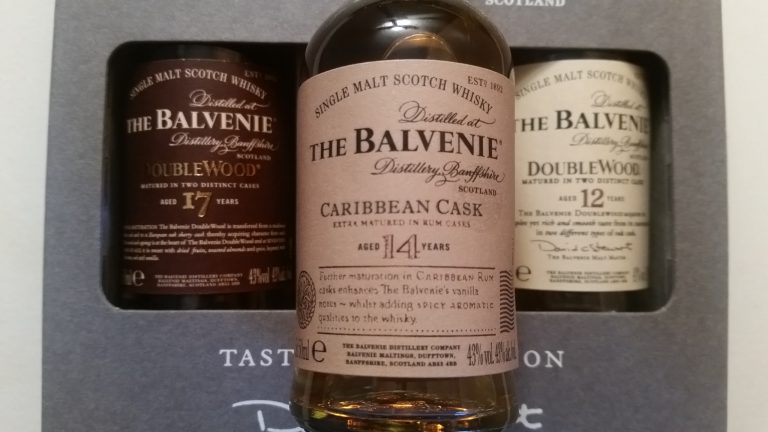 This idea of mine to pick up packs of miniatures to review was one of my better ideas. I get to bring you whisky reviews at a fraction of the cost! This week I have sampled The Balvenie Tasting Collection which includes the Balvenie 12 Doublewood (which we already reviewed a while back), the Balvenie 17 Doublewood and this rather interestingly named Balvenie 14 Caribbean Cask which is extra matured in rum casks.

Sounds interesting and exotic, doesn’t it?

They age the whisky for 14 years in traditional oak casks and then finish it off in casks that used to contain Caribbean rum. I do like a good rum from time to time so this was quite appealing to me and I was expecting some extra sweetness and fruity notes.

So did it deliver?

You will have to read my review of the Balvenie 14 Caribbean Cask that will begin as soon as this sentence concludes.

“Rounded with vanilla and sweet oak notes and a fruity character that develops with time.”

Ripe red and green grapes, mango, the rum comes through a touch but also some port, and caramel in the mix as well.

Chewy with tropical fruits, passion fruit and mango come to mind in particular, with a little peach. Sugar cane, molasses then some citrus in a subtle way and it’s also laced with golden honey.

Peppery with ripe peaches, sugary dark rum. A short finish but a good one.

This is a great whisky with some amazing flavors but it has one quality that really stands out and that is its’ uniqueness, something that I love in a whisky.

These whiskies that are “finished” in casks such rum, wine and port can be hit and miss but this one definitely works adding a fruity and sugarcane type quality to this drink that really lives up to its name. I can imagine sipping at this on a Caribbean beach sat in a hammock watching the sunset. Thinking about it, I’d be happy in that scenario with any whisky but that doesn’t detract from the quality this possess.

If you are looking for something a little different in a Scotch whiskey and like a bit of fruit and/or rum you have got to try this.