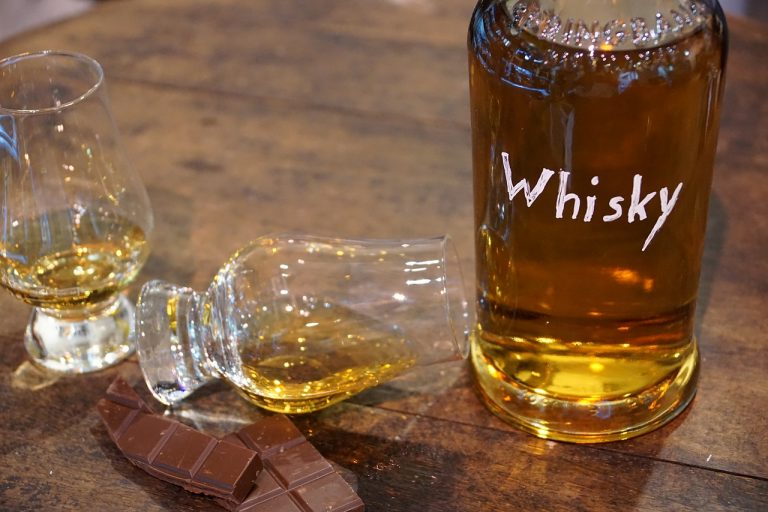 Whiskey remains one of the world’s most popular spirits. It is a complex drink that can contain a huge variety of flavors and aromas, including vanilla, oak, honey, cherry, spices, and various fruits. Whiskey is also a versatile drink that can be enjoyed straight or in a cocktail.

But where did this wonderful beverage come from? Where and when was it invented? And By Who?

In this post, I’ll explain the origins of whiskey and how different types of whiskey were developed. It’s a bit of a convoluted journey with some “fuzzy” dates (they were all drinking whiskey), but a journey that is very interesting!

The development of distillation

The production of whiskey relies upon “distillation”, which is a technique for separating substances from a liquid mixture using boiling and condensation.  Historians believe that distillation was first developed in 2000 BC in ancient Mesopotamia (what we call Iraq and Syria today). They think the Mesopotamians used distillation to create perfumes from flowers and other ingredients.

We know from written records that distillation was employed by the Ancient Greeks around 100 AD. The philosopher Alexander of Aphrodisias employed distillation to turn sea water into pure drinking water.

Interestingly, the science of distillation passed back from the medieval Arabs to the medieval Latins. They recorded details of the process in manuscripts in the early 12th century.

Some historians believe that the first person to use distillation to make liquor was the Arab chemist Abu Musa Jabir ibn Hayyan, who did so in 800 AD. They believe he used distillation to purify a beverage made from fermentation to discover that it created a very strong form of alcohol.

The earliest record of distillation in Europe occurred in Italy in the 13th century, when a philosopher named Ramon Llull used it to distill alcohol from wine.

Sometime around this period, distillation became much more common in Europe. This was largely thanks to the traveling nomads and Christian monks using distillation to make medicines for medical conditions including palsy and smallpox.

It is believed that distilling techniques were brought to Ireland and Scotland between 1100 and 1300 by these Christian monks. It is around this time that the first whiskeys were made.

When and Where was Whisky Invented?

The first written record of the term “whisky” being used was in the Irish Annal of Clonmacnoise in 1405 AD. The book states that the head of a clan died after “taking a surfeit [excessive amount] of aqua vitae” at Christmas. As you can see, it is possible to have too much of a good thing.

The word ‘whisky’ comes from the Gaelic ‘uisge beatha’, or ‘usquebaugh’, which means ‘water of life’. Gaelic is a variation of Celtic spoken which was developed in the Highlands of Scotland.

Another of the oldest historical references to whisky came from Mr J Marshall Robb, who wrote the book ‘Scotch Whisky’. In the book, Robb says: ‘The oldest reference to whisky occurs in the Scottish Exchequer Rolls for 1494, where there is an entry of ‘eight bolls of malt to Friar John Cor wherewith to make aqua vitae’.

The number of distilleries in Ireland and Scotland quickly grew around this time. Some of the world’s oldest distilleries were established including Old Bushmills Distillery.

Whiskey Arrives in the United States

European colonists arriving in America in the early 17th Century brought the practice of distilling whisky with them. Around this time, the Acts of Union merged the Kingdoms of Scotland and England. Taxes rose dramatically and the English Malt Tax of 1725 was introduced. This caused many Scottish distilleries to go underground. They would often produce whiskies at night, which is how the term “Moonshine” was coined.

Back in the United States, “whiskey” became a form of currency, particularly during the American Revolutionary War. The first commercial distillery was established in Kentucky in 1783, by a man named Evan Williams. The Americans were a bit more flexible when it came to mash ingredients and experimented with corn, wheat, and rye (all popular varieties of American whiskeys today).

By the late 18th Century, excises were levied on whiskey to help pay back  the debts incurred during the war. This whiskey tax was very unpopular and eventually led to violence during the Whiskey Rebellion. The rebellion was eventually resolved thanks to Thomas Jefferson repealing the tax in 1801.

Back in the UK, a young man named John Walker began producing his own whisky, which would go on to be somewhat popular!

The Americans were continually experimenting with whiskey distillation and in 1823 Dr. James C. Crow invented the sour mash. This process added spent mash to a new mash which helped to balance the acid and yeast levels. This process helped to improve the consistency of the mash and changed how bourbon was made.

The Irish were also busy revolutionizing the way whiskey was made. An Irish man named Aeneas Coffey invented the Coffey still, which made it cheaper to produce whiskey. In 1850 distilleries began using the Coffey still to produce the first blended whiskies.

Over the next century, Ireland, Scotland, and the United States began enacting laws regarding how whisky should be made and labeled. These laws are why whisky produced in Scotland is called “Whisky” and whisky produced elsewhere is called “Whiskey”. There were also extensive rules created regarding the requirements for a whiskey to be called a “Bourbon whiskey”, “Rye whiskey”, “Tennessee whiskey” and so on.

Today, we have hundreds of whiskies (and whiskeys) to choose from. This spirit continues to grow in popularity and there are countless world-class distilleries making incredible products.