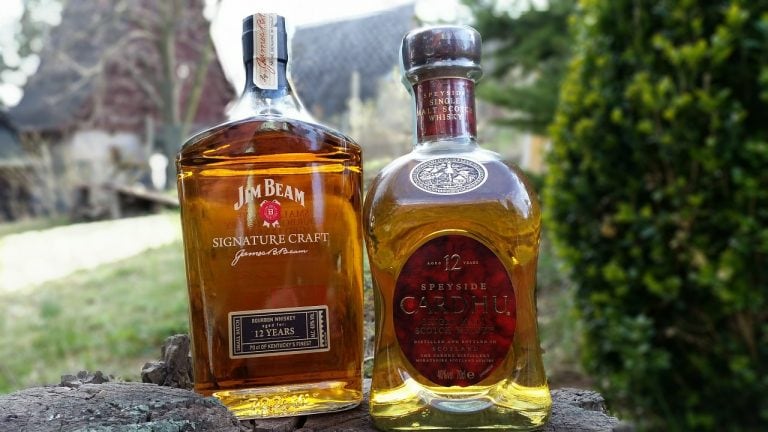 Distillers have been producing whisk(e)y for hundreds of years.  During that time, the spirit has evolved and traveled around the world.  As a result, there are many different types of whiskies to choose from, using different raw materials, distillation methods, and aging processes.

Having this cornucopia of spirits to choose from can be confusing for anyone new to the world of whisky.  To help you understand the many types of whiskies available, this article will explain the difference between “whisky” and “whiskey”.

What’s the difference between whisky and whiskey?

The name Whisky comes from the Gaelic word usquebaugh which means ‘water of life’ (Uisge means water. Beatha means life).  The term has been used to describe many types of spirits over time, including Eau de Vie, a colourless brandy.

In modern usage, the term “Whisky” is used often to describe a spirit that is distilled in Scotland from a fermented grain mash. “Whiskey” is used to refer to spirits that are distilled in America and Ireland, including Irish Whiskey, Bourbon Whiskey, Tennessee Whiskey, and Kentucky Whiskey.

There are also certain rules for whisk(e)y depending on the country but really the spelling is not important and there are exceptions to the generalizations above. Makers mark for example use the spelling whisky on their bottles despite being American.

The Scots take their whisky production seriously. They have been distilling whisky for at least 500 years and view it as an important part of their culture.

The Scottish government created the Scotch Whisky Regulations 2009 (SWR) to regulate the production, labelling, and packaging of Scotch whisky. The SWR defines “Scotch whisky” as whisky that is:

Whiskies can also be:

Most of the Scotch whiskies sold are blended whiskies.

Whiskey is often used to describe spirits created from a fermented grain mash that are produced in the USA (and Ireland). More than a dozen countries have established a reputation for producing excellent whiskey, including Ireland, the United States, Japan, Canada, Australia, Wales, and England. The main sub-categories of Whiskey include:

Irish whiskey must be produced in Ireland. Most Irish whiskies are tripled distilled, include multiple grains, and use unpeated malt for a cleaner flavour. Irish whiskies include:

The Americans adopted whiskey in a big way, creating new versions of the spirit that use different grains. They include:

All American whiskey must be distilled to no more than 80% ABV, and barrelled at no more than 125 proof. Distillers are only allowed to add water to the final product — no additional flavours or colours are allowed.

If an American whiskey has been aged for more than two years, it will be designated as a “straight” whiskey.  If the whiskey does not have more than 51% of any single grain, it will simply be called a “straight whiskey”.

If it has more than 51%, it will still feature the name of the grain — so a 51% rye whiskey will be called a “straight rye whiskey”.

American whiskeys that are labeled as Tennessee or Kentucky whiskeys can only be produced by distilleries in those locations.

So there you have it!  The next time you look at a whiskey label, you will immediately know where it has come from, what the main ingredients are and how it was made. Hopefully this takes some of the mystery out of choosing a whisky or whiskey.