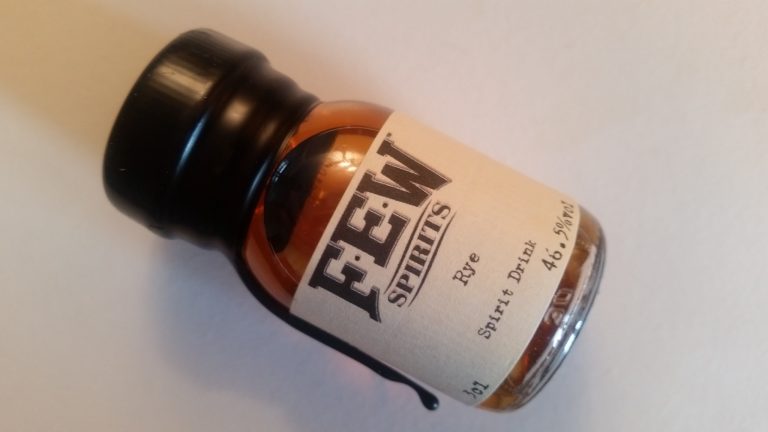 FEW spirits has come a long way in a short time. Having only started in 2011 and producing a range of spirits including whiskey, bourbon and even gin they are now a reasonably well-known brand and you can often see their bottles sat on the shelves of big supermarket chains here in the UK (I believe it is harder to pick up a bottle in some parts of the US).

For me it is a little overpriced for what it is as is the case with many of these craft distillery offerings, but I won’t hold that against it. “If it tastes good, I like it”, that is my incredibly unsophisticated motto!

FEW was founded in by Paul Hletko who wanted to set up a distillery in honor who owned a brewery in Czechoslovakia during the Second World War which was taken by the Nazis.

They are based in Evanston, Illinois near Chicago and I must say I’m a big fan of their branding. But that’s just labels and stuff right? Who cares about that shit, what’s the whiskey like?

Let’s find out by grabbing a spade and digging into my review of the Few Rye:

“The generous rye content is married with the sweetness of corn for a genteel interpretation of the venerable spirit. Patiently aged in air-dried oak barrels, its spicy character transcends mere resurgence. Behold – the renaissance of rye.”

Dried apricot. Buttery with lemon curd and some rye but it’s a light and gentle spice. I think it’s the fruitiest rye I’ve ever had, bursting with pears, peaches and citrus. A slight honey sweetness underpins it all.

The spice makes more of an appearance on the finish with nutmeg, cinnamon, pepper and cloves. It’s a repeater (keeps coming back) and it ends with some tobacco and cocoa.

If I had to try and sum this up in just one word it would be “interesting”. I like interesting.

It is unique with loads of fruit for a rye and a fresh, floral almost Bohemian quality (if that makes any sense at all!).

Each stage of the drink from nose to finish offers something new. I like it a lot.

I’d recommend trying a bottle though if you like a mega spicy rye it may not be the one for you.