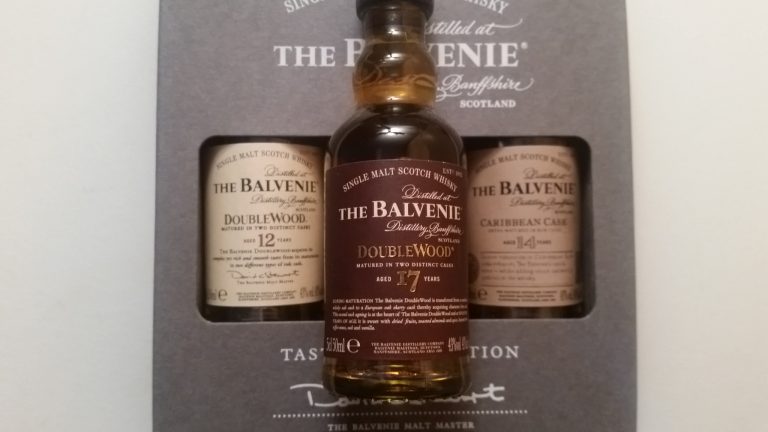 We reviewed the Balvenie 12 Doublewood a few months back and the consensus was that it’s a pleasant whisky but just lacking that little extra character. So I was excited to try this version which is the same juice but aged for an extra 5 years.

This was the last of The Balvenie trio I tried and the Caribbean Cask will take some beating!

Like it’s younger sibling this is finished in European oak sherry casks for a few months after being aged in traditional oak casks for 17 years (hence the Doublewood in the name). I’m not a huge fan of heavily sherried whisky but as this is just finished in sherry casks for the last few months rather than matured in them for the whole 17 years (as is the case with some whiskies), it should be ok with me.

The Balvenie is a well-respected distillery located in Dufftown in Scotland and owned by William Grant & Sons. They have won many awards for their whisky range over the years and you can be sure you are getting a quality dram.

But what of The Balvenie 17 Doublewood? Is it any good? Well, if you want to know you should… probably keep reading this review.

Woody, apples, makes you think of cider barrels, some golden syrup and pineapple.

I get a lot of cherry from this to start with and that is the predominant flavor for me which is cool because it is not often that fruit takes center stage in a whisky, but I love it when it does. I guess I would describe it as cherry wood. There is some pie crust, pineapples and stewed fruits such as plums and raspberries. Very enjoyable indeed.

Wood and fruits with hints of pineapple, apricots and some vanilla at the end.

You have probably guessed that I liked this. I do love a fruity whisky and this delivers in that regard in a unique way. It is definitely a step up from the 12 year and if you can afford it I would recommend spending the extra cash to get this. The 12 is a good whisky too though but this just has more character and depth to it.

It is quite woody from its 17 years in the barrel and that can sometimes be a bad thing but in this case, it adds to the experience and body of the juice.