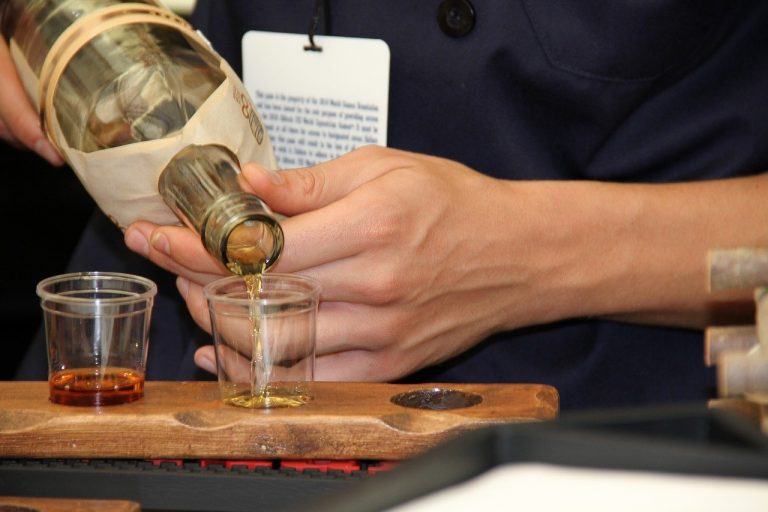 One of the main challenges of learning about whiskey for the first time is getting your head around the different types of whiskey that are available. There are many varieties including Scotch whisky, Irish whiskey, Bourbon whiskey, and Rye whiskey.

Each whiskey variety differs in terms of its ingredients, how it is distilled, where it is made, and how it is blended. There are even rules and regulations which determine how a whiskey must be made to be labeled a certain way.

To help you better understand whiskey in all of its forms, this post will answer the very common question — “What Is The Difference Between Bourbon And Whiskey?”

Let’s start by defining “whiskey”. Whiskey is a spirit that is distilled from a fermented grain mash and aged in a wooden barrel. It can be made using a variety of different grains including corn, rye, barley, and wheat. In most cases, it will be a blend of several grains, with the dominant grain determining the “type” of whiskey.

The grains used in the mash, how it is distilled, how long it is aged in a barrel, and how it is blended will determine the flavor of a whiskey. There is a huge diversity of flavors and aromas between different whiskeys — which is one of the reasons why sampling whiskey is so exciting.

Several countries have established strict rules about how certain types of whiskeys are made. For example, Scotland has defined “Scotch whisky” as:

What about Bourbon whiskey?

What constitutes “bourbon whiskey” differs from country to country. However, it always refers to whiskey that is made from a mash containing at least 51% corn.

The definition that matters the most is the American one because bourbon has a long history in the deep south of the United States. Distilleries have been making bourbon in Bourbon Country, Kentucky since the late 18th Century after distilling was brought to the region by European immigrants.

The Americans mastered the production of bourbon so much that it is considered the birthplace of the spirit. In fact, the name “Bourbon” is thought to have come from either Bourbon Country or from Bourbon Street in New Orleans.

So what is American bourbon whiskey? It is a whiskey that is:

There is no minimum aging period for bourbon, so it can reside in a cask for as little a couple of months before being bottled. The exception is “straight” bourbon whiskey, must be aged in a charred new oak barrel for at least two years. Straight whiskeys must not contain any added flavoring, coloring, or other additives. Any bourbon that is aged for less than 4 years must specify so on its label.

The regulations for American bourbon whiskey are strict because distillers spent a lot of time tampering with their whiskeys in the 1800s. They would place all kinds of additives into their whiskey to reduce its production cost or to produce it faster. The end result of this tampering was a lot of poorly made bourbon whiskey. At best, these early bourbons tasted horrible and at worst they were dangerous to consume.

After creating regulations about the kinds of spirits that could be called bourbon, the production quality in distilleries improved. That’s why American bourbon whiskey is now considered one of the best and most delicious spirits in the world.

What about Tennessee whiskey and Kentucky bourbon?

The vast majority of Tennessee whiskey producers filter their whiskey using the Lincoln Country Process. This process involves running the whiskey through charcoal chips to remove impurities before it is placed in a barrel for aging. This process gives the whiskey a smoother flavor.

Kentucky Bourbon Whiskey, also called Kentucky Straight Bourbon Whiskey when aged for two years, must be produced in Kentucky. About 95% of the world’s bourbon supply is made in Kentucky, so when you open a bourbon, it is very likely to have come from Kentucky.

At the end of the day, the best way to learn the difference between bourbon and whiskey is to sample a wide range of different spirits. A great place to start is comparing a Tennessee whiskey with a single malt Scotch.

Look for differences in appearance, aroma, and flavor. You will soon discover that sampling whiskeys and learning how they differ is extremely enjoyable!