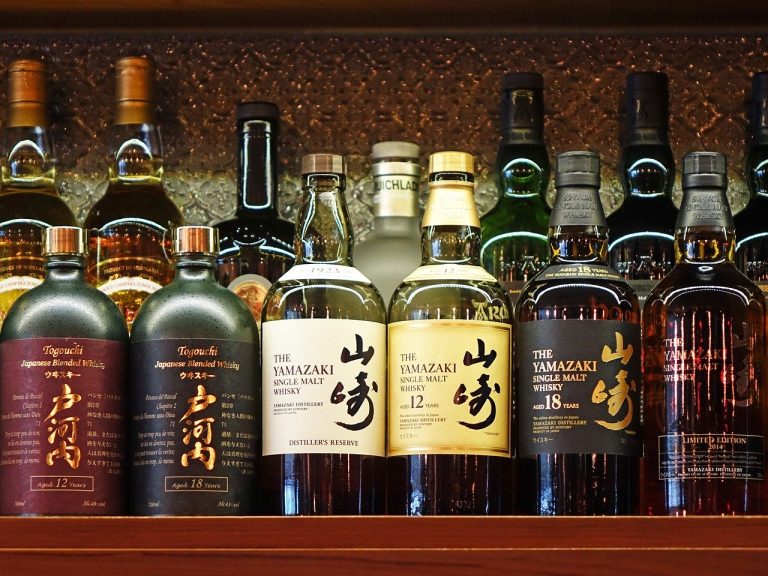 Japanese distilleries have certainly made their mark on the world of whisky in the past two decades. They have been producing a wide range of world-class whiskies, from extremely smooth single malts through to delicious blended grain whiskies.

Japanese whisky makers have displayed incredible ingenuity and creativity, combining traditional Scotch making techniques with new approaches. If you enjoy delicious, high-end whisky, you will find that Japan has a lot to offer.

What is Japanese Whisky? 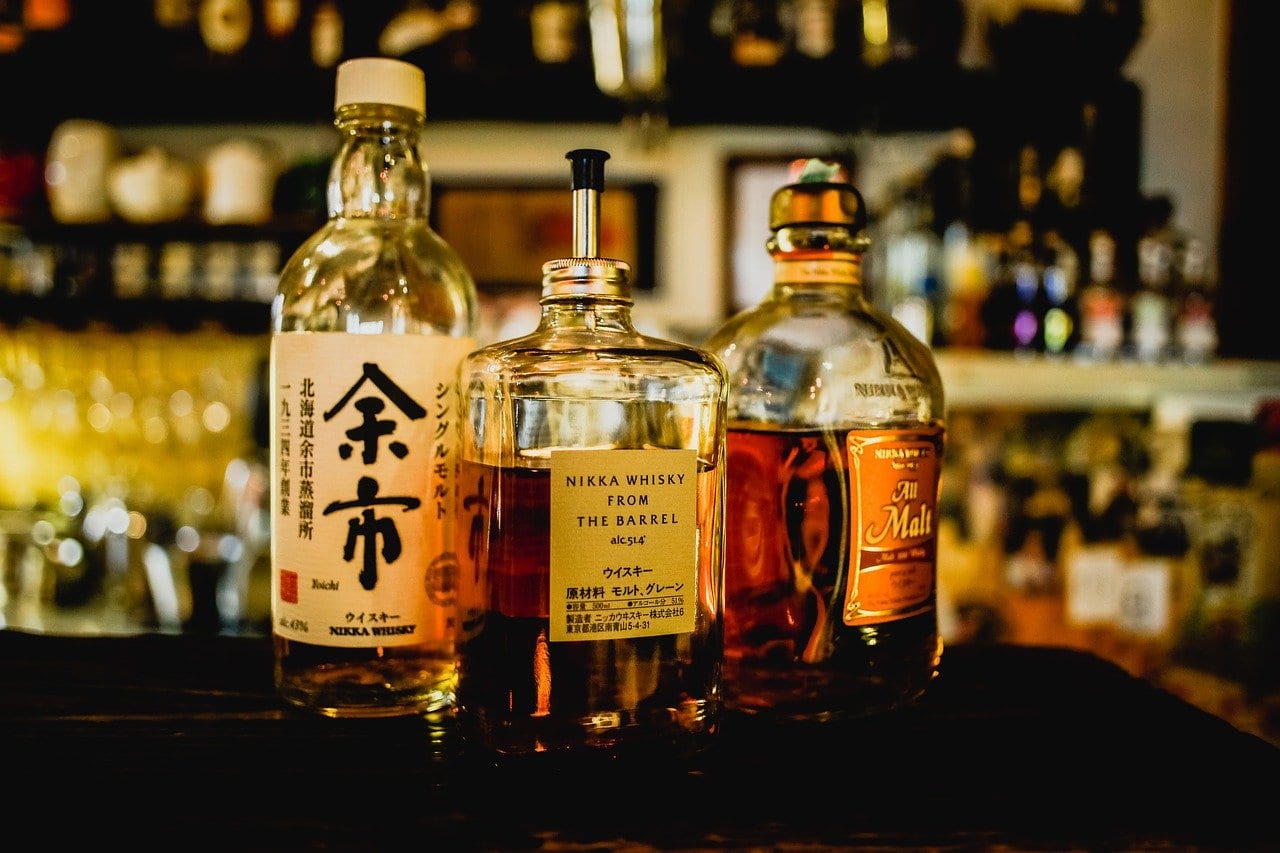 In early 1918, a young Japanese chemist named Masataka Taketsuru moved to Scotland with the goal of becoming a distiller. He apprenticed at several whisky distilleries and discovered how Scotch whisky was made.

When he returned to Japan in 1923, he partnered with Shinjiro Torii to launch Yamazaki Distillery, under the company name Kotobukiya. Taketsuru’s whisky-making ability combined well with the Torii’s experienced palate and the whisky they produced was high-quality.

In 1934, Taketsuru decided to build his own distillery on the island of Hokkaido, which had a cooler climate which was more like Scotland. He launched the company Dai Nippon Kaju, and built Yoichi distillery. Shinjiro Torii retained control of Kotobukiya.

In later years, Kotobukiya changed its name to Suntory and Dai Nippon Kaju became Nikka. These two companies are the largest producers of Japanese whisky today.

The popularity of Japanese whisky dramatically increased in the 2000s, largely due to Japanese whiskey makers winning several major awards.

These awards included the International Spirits Challenge and Whisky Magazine Awards. Japanese whisky distilleries were no longer a curiosity, they were producing some of the best whiskies in the world, beating distilleries in Ireland, Scotland, and the United States.

Most Japanese whisky makers are heavily influenced by the Scotch whisky tradition. That’s why they tend to produce whisky distilled in pot stills, and aged in oak casks.

However, there are a few key differences between Japanese whisky and Scotch whisky. The first difference relates to the use of raw distillates, which is a whisky straight from the still before it enters the cask. It is a colorless liquid that is extremely strong and quite harsh. The time it spends in the cask mellows its flavor and reduces its alcohol content.

Japan, on the other hand, only has a small number of distilleries. As a result, single distilleries will often produce different raw distillates in-house, then use them to create unique their own blended whiskies with unique flavor profiles.

The distillates produced by Japanese distilleries are typically closely guarded, while it is common for Scotch makers to sell or trade distillates to make blends.

The Japanese have also explored making rice whisky rather than using malt and grain.

Japanese whisky producers use some unique terminology, which describes the way the whisky was produced or how it is consumed. Some common terms include:

Pure malts are the equivalent of blended malts in Scotland. They contain whiskies which are made from a 100% malted barley mash that is distilled in pot stills and aged in oak.

Ji-Whisky is a name given to very small distilleries that do not sell their products nationwide. To sample these whiskies, you will need to visit the distillery or region where it is produced. Be careful when sampling Ji-Whisky as the rules surrounding whisky production are very relaxed in Japan. This can mean that some Ji-Whiskies may not meet the same criteria as a normal whisky. Check with the distillery before making a purchase.

Some of the most well known Ji-Whisky brands include:

One of the most interesting aspects of Japanese whisky production is that it can use oak that is not found in other parts of the world. The use of these less common oaks imparts the whisky with a unique flavor.

A Mizukara Cask is made from Mongolian Oak (quercus mongolica), which is indigenous to several parts of Asia, including Japan, China, and Mongolia. While this type of oak is in the same family as European oak and American oak, it is much softer and more porous.

A Mizukara cask is often used to finish a whisky before bottling. It imparts some delicious flavors in the whisky, including blossoms, floral, vanilla, and various spices.

Most distilleries will mature their whisky in oak barrels that have previously been used to store another spirit. This gives the whisky additional flavors and alters its character.

Scotch whisky makers tend to use old bourbon, sherry, or port barrels. In addition to these types of barrels, the Japanese also use Shochu Casks. Shochu is a traditional Japanese spirit that is primarily made from sweet potatoes, sugar, buckwheat barley, and rice. 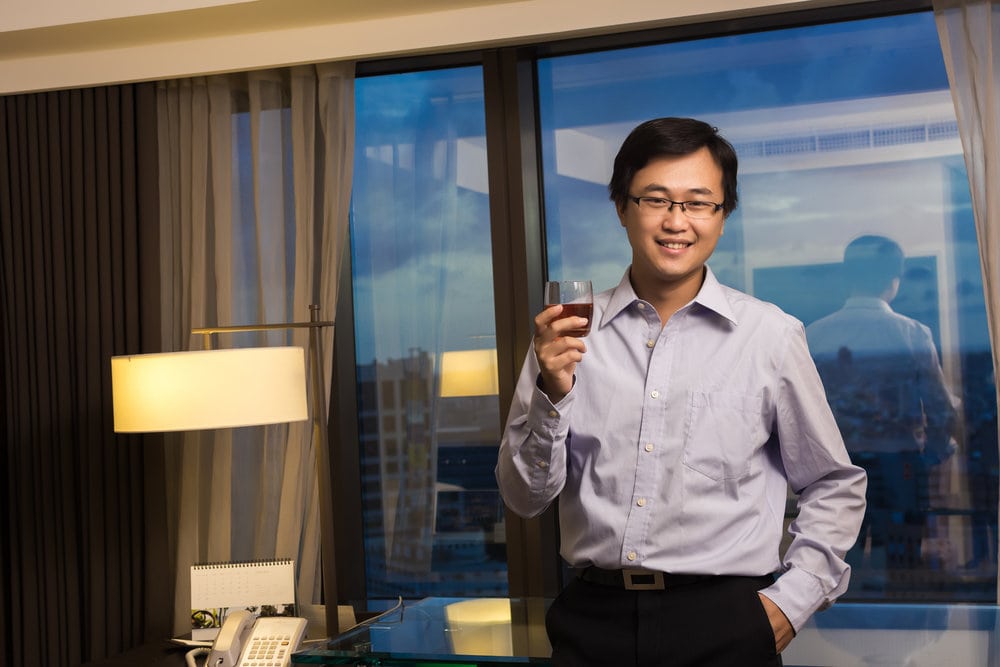 Most people drink high-quality Japanese whiskey like they would Scotch whisky: neat, with a splash of water, or on the rocks. Japanese drinkers often use blended whiskies in cocktails like the very popular whisky highball (called a haibōru in Japanese).

Interestingly, the Japanese highball is slightly different from a western highball. A zen-like focus is placed on its preparation and the highest quality ingredients are used. Bartenders will shave the ice before placing it in the glass and prepare the ingredients very carefully.

In winter, the Japanese will add hot water to their whisky to make “Oyuwari”. In summer, they will mix whisky with cold water to make “Mizuwari”. Japanese consumers often drink whisky and soda (a highball or another cocktail) with their meals.

There are many excellent options to choose from, but here are our choices for the best Japanese whiskies (based on quality, availability, and price):

Suntory is Japan’s biggest whisky company and the producer of several top-shelf whiskies. Established in 1923 (when the Yamazaki Distillery opened), Suntory now has large distilleries in Mishima-gun, Hokuto, and Chita-shi.

Hibiki Japanese Harmony is one of the company’s most popular products. It is a no age statement (NAS) blend of several whiskies that have been carefully selected to give the finished product a ‘harmonious’ aroma and palate. This blend includes at least five grain and malt whiskies which have been aged in five different types of casks.

It is a complex blend with a wonderful combination of flavors and aromas. The nose includes plenty of oak, honey, and floral notes while the flavor is strong on honey custard, vanilla, burnt caramel, and orange zest. Expect a sweet finish with orange and chocolate.

If you enjoy this whisky, see if you can find a bottle of Hibiki 21. Although it is a more expensive whisky, it has been perfectly aged and is an exceptional drop.

This delicious Japanese whisky is from the Miyagikyo Distillery, which was established by master distiller Masataka Taketsuru in 1934. This is the largest distillery of the Nikka Whisky Company and one that has been responsible for some of the best whiskies created in Japan.

Nikka Coffey Grain Whisky (named after Aeneas Coffey) is a sweet whisky with a mash bill that is mostly corn, with some malted barley. This whisky is distilled in a Coffey still, which was imported from Scotland in 1963. This type of still is renowned for producing grain spirits with high alcohol content while retaining the aroma and flavors of the original grains.

This strong whisky has a nose including vanilla, spices, herbs, and corn. The palate is mostly vanilla, syrup, malted barley, caramel, oak, and fruit (melons and grapefruit). The finish is long and features a corn aftertaste.

This is another high-quality Suntory product that is very popular with whisky aficionados.  It is a premium pure malt whisky that is fermented in wooden washbacks and distilled in small pot stills. Finally, it is aged in a combination of American, Spanish and Japanese oak.

The use of smaller than normal pot stills helps to give the spirit a deep, rich flavor that whisky drinkers love. The aroma of the 12-year-old is strong in florals, cinnamon, apple, peach, and tropical fruits. The palate has plenty of vanilla, citrus, and spice.

There is a lingering cedar wood flavor from the oak barrels used. This is an outstanding whisky and a great introduction to Japanese whisky. If you appreciate the flavors of the 12-year-old, try the 18-year-old. It has a wonderful palate with dark fruits, raisins and apricots. The ex-sherry barrels give it a rich flavor.

Akashi White Oak Distillery has a long history of distillation, being owned by a family that has been making alcohol for more than 300 years. Although White Oak Whisky has the honor of holding Japan’s first whisky license (issued in 1919), the family didn’t produce any premium whisky under the brand until 1984.

Akashi White Oak Blended whisky is heavily influenced by traditional Scottish grain whiskies. It is a lightly peated whisky with a delicious flavor that includes malt, vanilla, oak, and black cherry. The time in ex-bourbon barrels and Japanese shochu casks gives it a rich flavor and plenty of character. This distillery also produces an incredible single malt worth tracking down.