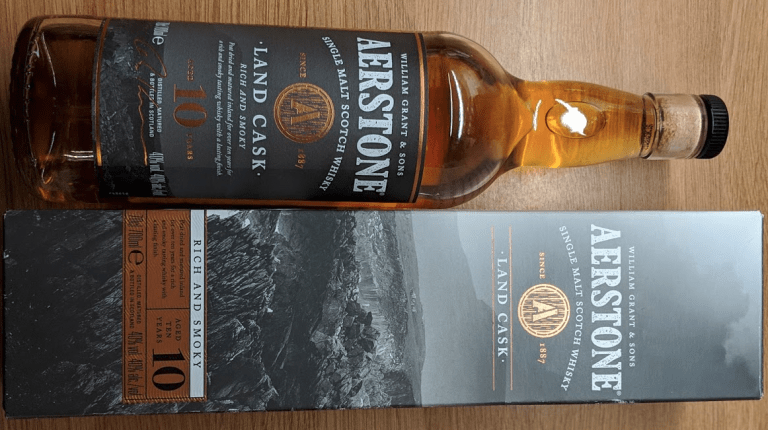 Everyone is familiar with William Grant & Sons, their name is found on the deeds to 6 of the most internationally recognised distilleries and the brands are well respected.

They also hold the record for the highest number of medals and seals of approval from the International Spirits Challenge in one year, in 2004 when they had a total of 29. No mean feat in what is a competitive industry these days and awards sell bottles.

Aerstone then is a new brand from them that currently encompasses 2 new offerings. It’s the Land Cask 10 Year Old that we’re featuring Today.

The idea behind this, according to William Grant & Sons is to “simplify” the offerings. They’ve given such trials a go with a similar price point and under the Balvenie brand. Aerstone is an entirely new name and with a slightly different feel to the packaging and marketing alongside. Not to mention the fact it’s to an entirely different market that we know Today compared to how things stood 10-15 years ago.

In reality this is probably an attempt at introducing a new, more premium feeling, Single Malt in their budget end of the range that’s currently comfortably dominated by the Glenfiddich’s within their portfolio.
When released both the Aerstone offerings were exclusively available at Tesco in the UK for £20 , here a few months later this seems to have been universally raised to about £30 and is available in many more stores.

Palate: Along with the rich appearance it’s rich on the tongue, the peat is there along with orange peel, light wood notes and sweet candy and toffee.

Overall: A quite deep level of flavour at this price, very pleasant.

I wasn’t expecting too much from this Aerstone, it seemed at first impression just to be another niche filler but that mistake was quickly shut down. It’s truly delicious and great to see a Single Malt with an age statement trying to find it’s home in the readily available consumer market.

With the Highland peat and inland aged finish this is actually a really sensible buy. You’re not limiting yourself to just the peat fans who normally hang around the Islay’s and those who traditionally stick to a Speyside will also find this a very enjoyable dram.

I really think it’s a good Whisky for anyone who just happens to enjoy Single Malt and there’s no reason it couldn’t find a home in most peoples collection. If nothing more than to have something to drink when you fancy good “Whisky”

If there’s no decision to make about what region to enjoy Tonight then keeping Whisky simple and enjoyable is really no very bad thing at all.

Nose
84
Taste
92
Finish
86
Balance, Body & Feel
94
Price
Readily available
Feels good in the mouth
Well balanced with Peat and Candy
Could be a little noncommital for some
89