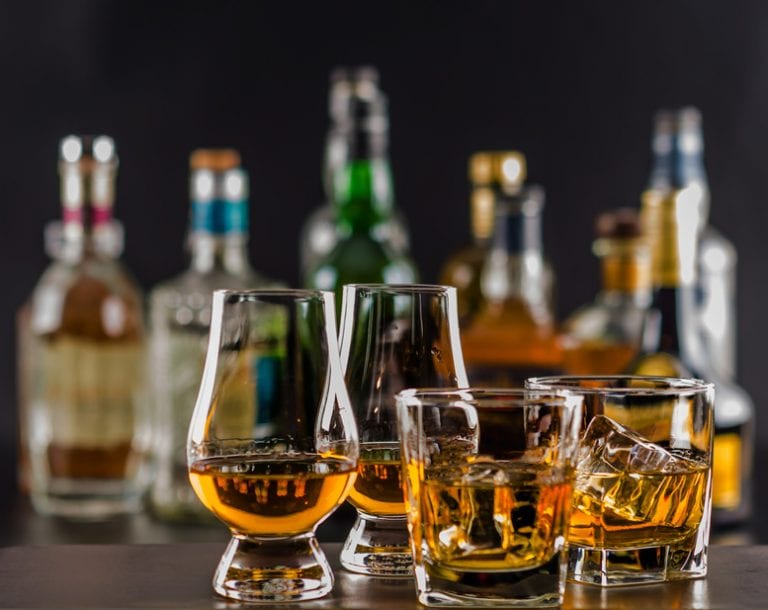 In Scotland its spelt “whisky”, in American and Ireland it tends to be “whiskey” but spelling differences aside, it remains a popular choice for discerning drinkers around the world.

From Bourbon to blended, rye to corn, there are several distinct varieties of whiskey available which differ in the type of grain used during the fermentation process.

Manufactured from malted barley and aged in casks for a minimum of three years, malt whiskey is a favorite for those who appreciate quality and refinement.

There are strict regulations that define what is officially classed as a malt whiskey. These state that only barley and water may be used and forbids the addition of any other ingredients other than caramel coloring at the end of the process.

The result is a very pure-tasting, unique product with a complex and widely variable flavor.

The ever-popular single Malt gets its name from the way it is created. To qualify as a true single malt, the whisky must be produced by one sole distillery rather than by a chain of manufacturers.

Enthusiasts and connoisseurs often prefer this variety as it boasts incredibly deep and complex flavors that can vary quite profoundly depending on which distillery produced it.

Probably the most popular type of whiskey, though also one of the most expensive, this style of spirit is often reserved for special occasions and generally consumed without any mixer.

Water or ice can be added, depending on individual taste, though many people prefer to drink it neat or straight.

As the name suggests, blended whiskey is produced by blending a single malt with different types of whiskey and grain spirit.

Generally cheaper than a single malt and often produced in large quantities, this type is often served with a mixer or as a part of a cocktail.

Though once considered to be inferior to single malt whiskey, there is now a range of high quality blended whiskies available from around the world, though these are generally a lot more expensive than the readily available high-street brands.

Many good quality blended whiskies use a combination high-quality single malt and single grain spirits, which can provide the same kind of complexity and depth of flavor you would find in a traditional single malt. Japanese blended whiskies are particularly well known for their quality, as are Irish whiskeys, though many distilleries around the world produce a premium quality product.

Though once less popular in the UK and Europe, Grain Whiskey is now being produced to the same exacting standards of many of the worlds well loved distilleries.

Made by using grains other than barley and typically used as part of the blending process, this is still a type of whiskey in its own right and can be enjoyed on its own or as part of a cocktail.

Unlike the malted variety of this diverse and well loved spirit, grain whiskey can be made from a variety of ingredients including corn, wheat and rye. The flavor is quite different to that of a single malt and can vary depending on how long the product has been distilled for.

Loved in the USA and beyond, Bourbon has a sweet, rich flavor, very different to other types of whiskey.

Like single malts and grains, there are strict regulations that dictate what can be legally classified as a true bourbon, including the rule that more than half of the grains used in the production process must be corn.

There are also stipulations relating to the storage of the liquid, oak barrels must be used rather than man made containers and the bourbon must be below the strength of 125% proof when it is initially contained. F

amous brand names made this type of whiskey a permanent fixture in most bars, restaurants and pubs. Served over ice, with a sweet mixer, they have a characterful, long lasting aftertaste that compliments cola, lemon and anything else with a sharp, fruity flavor.

Typically American and Canadian, the two main types of Rye Whiskey are produced with a combination of ingredients that are made up of at least 51% rye grain.

When combined in a mash with corn, barley and other grains, rye yields a distinctive, flavorful variety of whiskey that is often overlooked by those who prefer blends and single malts.

Canadian Rye can be a misleading term as the finished product can vary so much that in some cases, no rye is used at all. Rye whiskey made in America is still popular among those who appreciate something a little different. The once-controversial drink was something of a staple during the prohibition era and though there are only a few distilleries that produce it, it does still exist today.

Overlooked by all but the most niche of whiskey enthusiasts corn whiskey is clear and generally a little stronger than bourbon. Produced by distilling corn mash and other ingredients, it takes only six months until it is ready for consumption.

Nicknamed “moonshine” this type of alcohol was illegal for large parts of the last century, though corn whiskey is now available to buy, providing it meets a series of regulations relating to strength and quality.

What Type is the Best?

This depends on a person’s own tastes, though some people may prefer the peat undertones or dry, salty finish of a Scottish single malt, others may enjoy the full bodied, sweetness of a bourbon, there really is no right or wrong.

Generally, you will get what you pay for, though there are some good quality budget options, too. Like most things, its all down to what you enjoy.

Though a certain degree of elitism does still exist when it comes to discussing whiskey, production standards have improved across the board and up to date menus will now include single grains, bourbons and even rye whiskey alongside the traditional single malts and blended varieties.