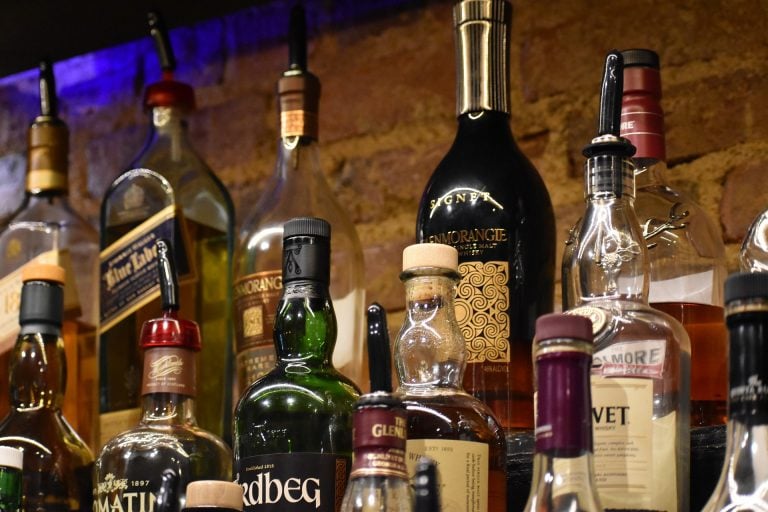 Before we begin to look at the differences between bourbon and other forms of whiskey or whisky, depending on the country of origin, we should begin with the most standard definition of whiskey there is a spirit composed of fermented grains, typically rye, wheat, corn, barley, or a combination, that has been aged in casks for at least 2-3 years, and is then bottled at a minimum of 40%.

As you can already imagine, that level of variance in terms of ingredients, fermentation time, cask choice, aging time, and other variables means pinning down the exact flavors of whiskey is almost impossible.

It also means that there is room for very specialist forms of whiskey, such as rye, peated, grain, and yes—bourbon!

A Short History Of Bourbon

Bourbon is one of the more strictly regulated spirits in the world—with a distinct and narrow definition of what can and can’t be called by the term, but that wasn’t always the case.

When it first made appearances in the 1800s, it was subject to frequent dilution, tampering, and other adulterations. This prompted the Bottled In Bond act of 1897 that governed the very first regulation of bourbon in the U.S.

Despite this attempt, bourbon remained very much a maligned and poor-quality spirit through the early and mid 20th century, that was until the pioneering work of Bill Samuels, who developed his famous recipe that would change bourbon forever as part of the heralded Maker’s Mark brand.

This recipe can still be seen in the regulations which govern bourbon to this day, and state that any drink described as bourbon must be:

It’s from these regulations that we get the flavors and aromas that we come to think of as distinctively bourbon, and where we begin to see a number of breaks with some of the most recognized and popular types of whiskey that can be found, so let’s dive into these elements and see exactly what separates bourbon from other styles of whiskey.

The Corn Is The Thing: Grains & Mashbills

As we mentioned in the beginning, all whiskey is made from some form of fermented grain, however, bourbon is unique in its stipulated and heavy use of corn.

Whereas most Scottish whiskeys will be made from barley or grain, and in North America, Rye is more popular. Although there are examples of both to be found across the world, corn whiskey outside of bourbon is rare.

This is what gives the bourbon a flavor profile that sets it apart from other whiskeys, as the corn elements provide those sweeter caramel and vanilla notes that everyone identifies with the spirit.

The rest of the mash bill, the term used to describe the combination of grains involved, is what determines some of the variations in flavor profiles—with wheated bourbons providing a mellower, fruitier profile, compared to the spicy kick of rye dominated profiles.

This combination of grains is also what sets bourbon apart from other whiskeys, which are usually made from a single grain—predominantly barley.

This is the most recognizable form of whiskey, and what we know of as the classic single malt, that is made exclusively from malted barley, although some whiskeys are made from a combination of malted and unmalted, such as Irish whiskeys.

This single grain profile has also led some of the more acclaimed distilleries, such as Bruichladdich in Scotland and Waterford in Ireland to experiment with the idea of terroir and single farm whiskeys. 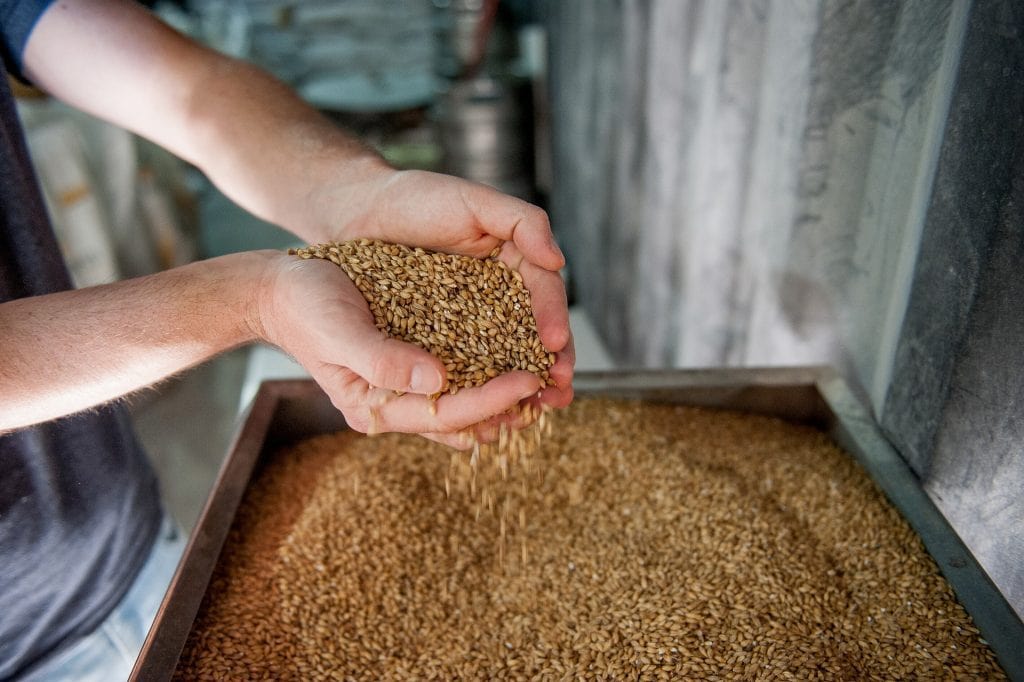 One of the biggest ways in which whiskey develops its unique variation is through the fermentation times and production of the distillate, and whilst this is also true of bourbon, the production process is still regulated in ways that set it apart from other whiskeys.

This is because bourbon has to hit certain proofs, another term for alcohol content, at various points in the process, whilst other whiskeys only need to be a minimum of 40% at the bottling stage.

In contrast, the mash, that is the mix of grains that will be fermented to make the spirit, must be distilled at a maximum of  160 proof and aged until it has reached no more than 125 proof, before then being bottled at the 80 proof that is standard for all whiskeys.

Another key point of difference between bourbon and other whiskeys produced across the globe is the presence of sour mash. Mash, believed to be a shortened form of maceration, refers to the fermentation process of turning and heating the grains that will then be fermented.

Unlike most other whiskeys, bourbon employs an additional stage, also seen in some beers, referred to as a sour mash. This involves the addition of the “set back” that is the spent residue from the previous distillation, this acidic ingredient, hence the term sour mash helps to regulate the PH during the fermentation period.

Whilst some bourbons will explicitly refer to their products as being “sour mash”, most famously Michters, the process is very much an industry-standard practice, and unless otherwise stated, a bourbon is probably produced using the sour mash process.

Something that the production process does have in common with a number of other whiskeys, including Scotch, Irish, and Japanese, is a geographical restriction, although it’s perhaps not the one you’d expect.

Despite the historical association, bourbon does not have to be made in Kentucky, simply the United States as a whole. In fact, one of the largest volume producers of Bourbon is MGP in Indiana, and there are notable craft distilleries in California, New York, and other places!

The first thing to note for bourbon is the somewhat confusing rules regarding aging, and the reality, bourbon does not have to be aged for any particular minimum, unless it’s labeled as straight bourbon whiskey, at which point it needs to be aged for at least 2 years.

This is less stringent, and shorter than the 3 years that are standard across the world, for whiskey. That being said, you can expect most bourbons to be somewhere in the range of 2-5 years old unless otherwise stated, depending on the distillery.

However, there is a reason for this, and that’s the oak that’s used for the aging process. Whereas most other whiskey types are aged in refill casks, that’s casks that have previously held another liquid, such as sherry, or even bourbon, bourbon by regulation must be aged in virgin, otherwise referred to as new, oak casks.

These casks are more active than refill casks, and impose more character onto the spirit in a shorter period of time, meaning bourbon does not require as much aging as other whiskeys.

The type of oak used has a huge impact on the flavor profile of a whiskey, and this can be ably demonstrated by the mandatory use of charred new American Oak in bourbon production.

Even the level of cask char has an impact, as when a barrel is charred, chemicals inside it break down into sugars, which caramelize in layers beneath the unburnt wood.

Then as the cask cools, you also get vanillin and the creation of the amber coloring that whiskeys are known for through the clear spirit mixing with the reds from tannic acids.

All of this science is relatively new, in comparison to the use of new American oak, but its results have always been there, in the deep amber and caramel color and flavor profile that is characteristic of bourbon.

Whilst American oak is popular amongst producers of other whiskeys, alongside European oak, the use of virgin oak is rarer outside of bourbon.

Especially within Scottish whiskey, casks will come in one of two forms, ex-bourbon or American whiskey casks, or ex-sherry casks.

This in turn explains some of the wider palettes of flavors available in other whiskies, as not only does the type of oak impart flavor, but the character of the spirit from its previous use will. Furthermore, whiskey producers will frequently combine cask types, building complex flavor profiles.

As you can imagine, it’s hard to pin down any kind of flavor profile for whiskey in general, especially in comparison to bourbons, which goes some way to explaining why the latter is the more popular cocktail ingredient, with its consistency and availability making it the perfect base for a number of combinations.

That being said, much like bourbon, different types of whiskey do also have their own broad characteristics, and here’s a handy guide:

Furthermore, with the right knowledge, it’s easy to pin down the same characteristics for a specific whiskey, and whether you’re looking at bourbon or another type of whiskey, there are a few key elements that you should look at when picking your next sipper: