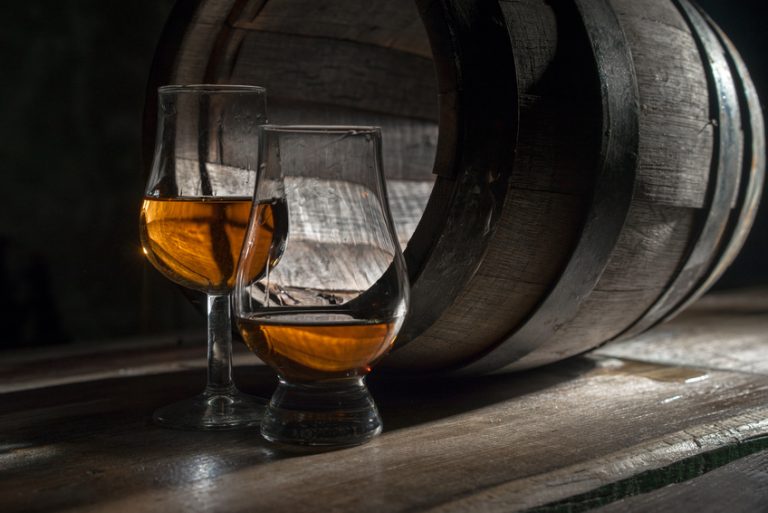 If you want to enjoy your whiskey as much as possible, it is important to learn more about the role that alcohol content plays.

In addition to determining how quickly you will be up on the dance floor, the alcohol content of your whiskey will have a dramatic effect on the flavor of your drink.

How much alcohol should whiskey have in it?

There are certain rules that govern the production of different varieties of Whiskeys and Scotch Whiskies. These rules include restrictions on the ingredients that can go in each whiskey and rules about where they should be produced. A Scotch Whiskey, for example, must be produced in Scotland using water and malted barley.

Whiskeys must also have a certain alcohol percentage in them during and after the production process. For example, Scotch Whisky must be distilled at no more than 94.8% ABV (190 US proof) and the finished product must be at least 40% ABV (80 US proof).

“Straight” American whiskeys must be distilled at no more than 80% ABV (160 US proof) and placed into the barrel to age at no more than 62.5% ABV (125 proof), then bottled at no less than 50% alcohol by volume (100 proof).  A straight whiskey is one that has a grain type, so it is a rye whiskey, bourbon whiskey, corn whiskey, malt whiskey, or wheat whiskey.

Unqualified American whiskeys that do not have a grain type must be distilled at less than 95% ABV (190 proof) and bottled at no less than 40% alcohol by volume (80 proof). These rules are designed to give consumers a product that is close to the optimum dilution level.

What is US proof?

In the early years of spirit production, there were no tools for measuring alcohol content accurately.

However, buyers needed to know how potent a whiskey was before buying it.  So, in the 16th Century, distillers developed a technique where whiskey would be mixed with a pellet of gun powder and ignited. If the flame was bright, that meant there was more alcohol in the whiskey. If the flame was bluish or weak, it indicated that the whiskey was under-proof. An exploding mixture indicated that the spirit was overproof and too strong.

The British later found that 100 proof spirits were around 57% ABV. That meant that 3% ABV equated to about 5 proof. That is why a whiskey with 40% alcohol by volume is called 80 proof.

Whiskey is made from a combination of grains that are cooked to extract sugars. This solution is then fermented in large tanks called washbacks. After fermentation this solution, called the “wash”, has an ABV of between 5 to 10%.

The wash is then distilled using larger copper stills. At the end of this process, it is common for Scotch Whiskies to have an ABV of 60-75% ABV and for American Whiskey to have an ABV around 90%.

Some whiskies will be diluted before being placed into barrels for ageing. Scotch, for example, will be diluted to 63.5% ABV (68% for grain whiskies). This strength is referred to as “cask strength”.

During the ageing process, the alcohol content of the whiskey will reduce by about 0.5% to 1% per year. This is called the “Angel’s Share” of the whiskey.

Finally, the whiskey is ready to be bottled. It may be diluted once more at this stage to bring it to a stage where it is ready to be consumed. Many whisky drinkers dilute their whiskey even further, adding water to break up the ethanol and guaiacol molecules in the whiskey, making it easier to taste the drink’s flavors.