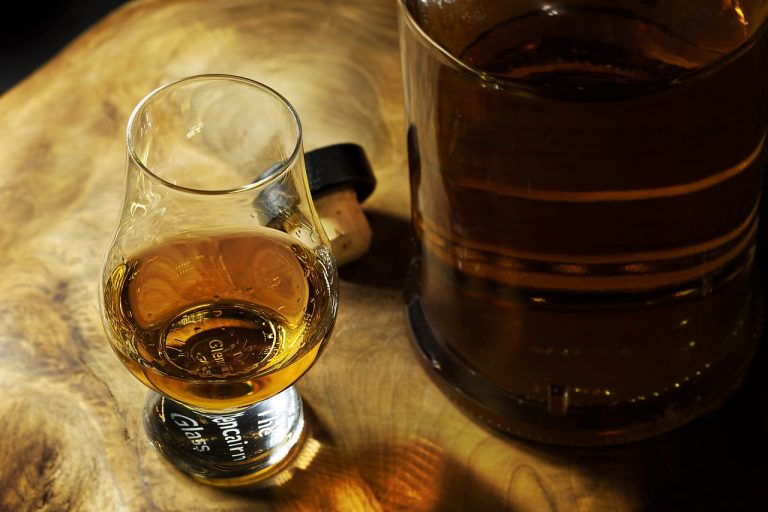 With new studies released every week, or what seems to be every week, there’s a misunderstanding amongst consumers about just how much sugar our favourite foods and beverages contain.

This misunderstanding is especially frustrating for customers looking to moderate their sugar intake, such as those with diabetes, or those on a health kick, looking to shed a few pounds in time for summer.

In this article, we’ll explore the sugar content of whiskey – including the best ways to moderate your sugar intake when drinking alcohol – so you rest assured that you’re not adding to your waistline or blood sugar level with every sip. 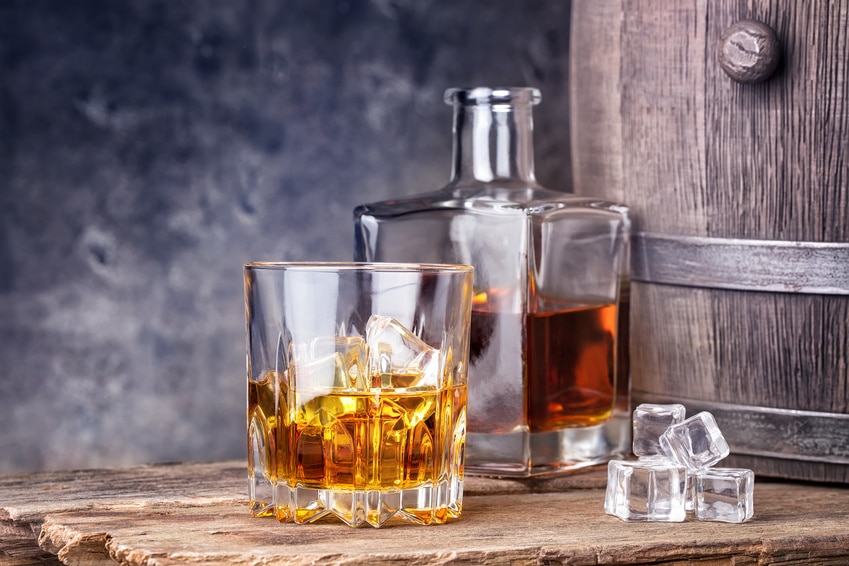 Confusion in the food and beverages industry is often led by muddled facts about variations on standard products, such as flavoured spirits and tonics, for example.

However, in this article, we’re looking at the standard, 86-proof whiskey, which means whiskey that contains 43% alcohol – the most widely available in supermarkets, bars, and restaurants.

If you’re drinking quality whiskey from brands such as Jack Daniels, 86-proof is the standard.

How Much Sugar is there in Whiskey?

And a standard shot of alcohol measures 44ml, which means, if you’re drinking a double whiskey on the rocks – only with ice cubes – your drink will contain 88ml of alcohol, which equals 0.088g of sugar.

What do these numbers mean?

Upon review, whiskey does not have much sugar at all – if consumed with ice only, that is.

However, if you’re drinking multiple drinks over the course of an evening or mixing your whiskey with a soft drink like Coca-Cola – a mixture frowned upon by whiskey aficionados around the world – the sugar content will rapidly increase.

For example, 250ml of full-fat Coca-Cola, the standard serving if you’re ordering a double whiskey and Coke, has 23.7g of sugar, bringing the sugar content of your drink to 23.8g – that’s almost six teaspoons, or two tablespoons, of sugar.

When you’re drinking whiskey, to keep sugar to a minimum, have it on the rocks or with water, and always moderate your intake.

If you drink whiskey every night, it will show. 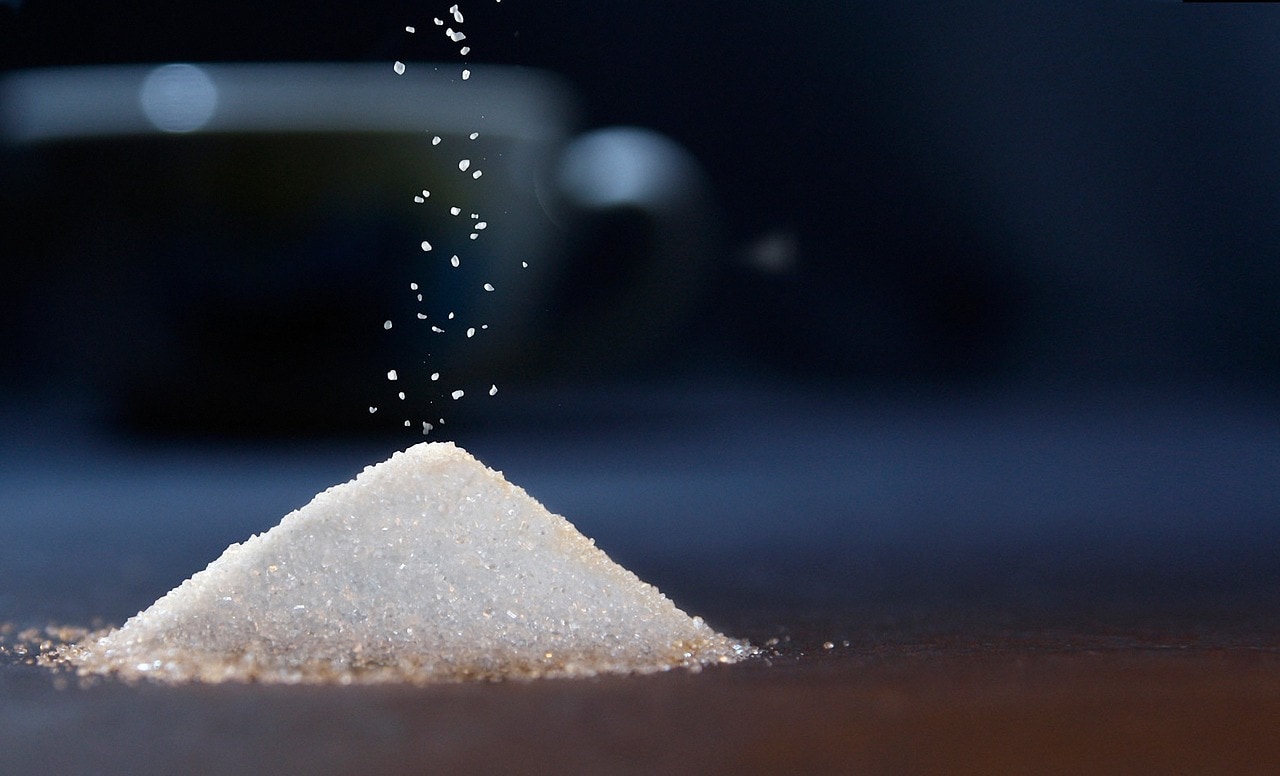 Can Whiskey Cause Weight Gain?

As a stand-alone drink on the rocks, the sugar content of whiskey is nothing to worry about.

However, it is an extremely calorific spirit.

Whiskey contains approximately 250 calories per 100ml, which means a double whiskey on the rocks has 220 calories.

And if you regularly exceed your daily intake and are not active, which means pursuing at least two hours of exercise three times a week, you will be a risk from significant weight gain, caused by whiskey.

If you’re drinking one or two drinks a week and that drink is whiskey on the rocks, you shouldn’t be too concerned.

When drinking whiskey and other spirits, keep your sugar intake to a minimum by avoiding common high-sugar mixers such as:

Similarly, many cocktails are extremely high in sugar and should be avoided if you’re watching your sugar intake or your weight.

For example, a Whiskey Sour has approximately 16g of sugar and 163 calories. A Manhattan is significantly better, with just 3g of sugar.

However, popular aperitifs are also a concern. For instance, a standard Irish Coffee has approximately 8g of sugar and 210 calories.

Once again, to ensure your alcohol intake doesn’t reflect on your waistband, choose whiskey on the rocks and moderate your consumption.

There are a variety of methods you can adapt to moderate your sugar intake.

The best place to begin when moderating your sugar intake is to not add additional sugar to your food and beverages, including tea and coffee.

If you’re drinking alcohol, opt for whiskey on the rocks, or watered down – this is standard in most pubs and bars.

Many drinkers choose plain tonic as they believe it’s a ‘healthier’ alternative; however, that’s not entirely true.

A standard bottle of tonic water contains 7g of sugar per 100ml, which rapidly adds up and ends up being just as bad as if you were mixing your whiskey, and other spirits, with Coca-Cola or another soft drink.

You must also moderate the sugar in your food.

To keep your sugar intake to a minimum, choose natural alternatives, such as natural Greek yoghurt rather than flavoured yoghurt.

Or add honey to your tea rather than granulated sugar, as natural sugar is much better for you, but should still be consumed in moderation.

If you insist on consuming more sugar than you should, it’s essential that you hit the gym, or participate in sport, at least a couple of times a week.

By staying active, you give yourself much more freedom to eat and drink the things you like without having to worry too much about the state of your waistline.

Health professionals recommend at least 150 minutes of exercise every week for a balanced lifestyle.

Wherever you are in the world, moderating your sugar intake is easy – it just requires a little compromise.

Providing you only drink a couple of glasses of whiskey every week, you have nothing to worry about.

However, always opt for whiskey on the rocks, or with water, and never mix your drinks with soft drinks such as Coca-Cola.

Also, you can give yourself more freedom by also watching your sugar intake through the food you eat, and by exercising regularly, so those calories don’t build up and add to your waistline.