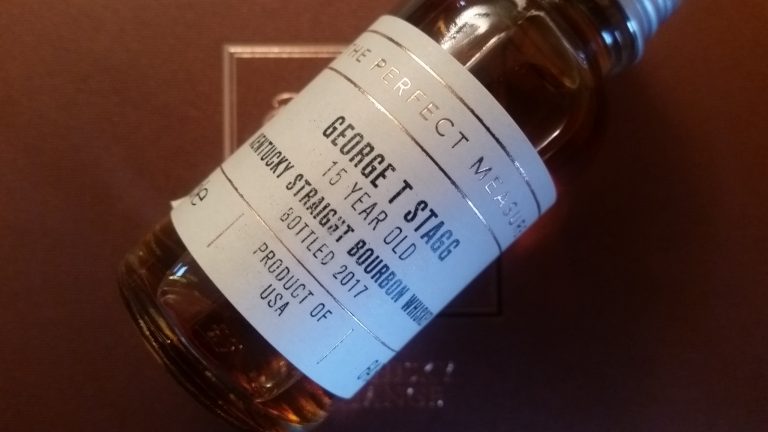 So here it is, review number 4 for the Buffalo Trace Antique Collection on WhiskeyBon and as a huge George T. Stagg fan, the one I was most excited about, even though I was pretty sure the Weller would be the one I enjoyed the most there is just something about Stagg I love. I think it’s just very unashamedly brash and bold.

If you love good old Kentucky Straight Bourbon whiskey you will want to give this a read for sure.

It also has a special place in my heart because it was the bourbon that really made me love bourbon. I had tried a few before but I went on holiday with a friend of mine and he brought some George T. Stagg. I took my first sip and the flavor hit me like a hammer in the taste buds and I have never forgotten that first taste!

Did it live up to expectation? Find out by having a read of my review of the George T. Stagg.

“This extremely hearty whiskey ages in new charred oak barrels for no less than 15 years.  Straight out of the barrel, uncut and unfiltered, the taste is powerful, flavorful and intense. Open it up with a few drops of water, sit back and ponder the wonders of the universe.”

Cherries and cinnamon up front, with only the slightest ethanol burn. Some fruity raspberry and strawberry jam notes, caramel and a hint of vanilla.

Hit’s you hard as any good GTS should but is subtler than others I have tried. Lovely waves of caramel followed by brown sugar, cinnamon and nutmeg. Toffee apples, cloves and tannins. I love it as usual.

Spicy with cinnamon, some dark fruits, creamy fudge and chocolate chips. Keeps coming back for more.

It is an easier going Stagg that some of the other releases in recent years but that is not necessarily a bad thing, it certainly isn’t the lowest proof in the series and it still packs a big punch.  It has real character and kind of fizzes on your tongue as you drink it. I think it is not quite as good as the 2015 or 2016 but it is still an amazing whiskey and I love to get a bottle of it but as with the rest of the BTAC collection, that is not going to happen (sobs).

It is a beastly drink and thoroughly enjoyable, for me it is second only to the mighty W. L. Weller for the 2017 BTAC collection.

Get your longing for more bourbon reviews satisfied here.