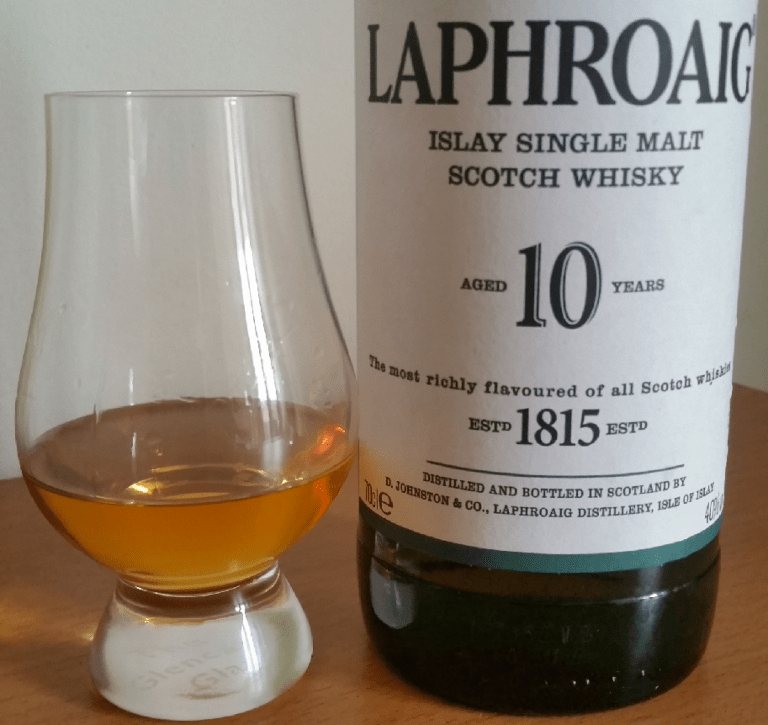 I had been drinking scotch for a good 4 to 5 years before I ever tried an Islay. It wasn’t deliberate and wasn’t because I didn’t think I’d like it, it is, of course, somewhat of an acquired taste! It just by chance really, I drank scotch casually and I would buy a bottle every few months at random to try the different ones but never happened upon on Islay.

Then one day I saw a bottle of Talisker 10 sat on the supermarket shelf and picked it up. I got home later that day, cracked it open and was blown away. It was like nothing I’d ever tasted before, totally unique.

And I liked it!

Laphroaig 10 is in the same peaty Islay club as the Talisker and I like it just as much.

Like other Islays the barley is dried over a burning peat which can only be found in the region and gives the whisky that distinctive “peaty” flavour. The name comes from the area in which the distillery is located by Loch Laphroaig and the brand is now owned by Beam Suntory.

The Laphroaig distillery is to be found on the south coast Isle of Islay, at the top of Loch Laphroaig. The word “Laphroaig” means “broad hollow by the bay.”

Since 1815, when the first wee dram of Laphroaig single malt dripped from the still, the company has adhered to its traditional recipe involving water from the Kilbride Stream, malted barley, and hand-cut peat, processed using copper alchemy, then cold-smoked and oak-aged.

The Isle of Islay is renowned for its single malt whiskies and the underlying peat flavour. The peat bogs are distinct from those on the mainland due to the higher concentration of Sphagnum, or peat moss. The Glenmachrie peat bog, owned by Laphroaig, has its own unique blend of heather, lichen, and moss, and it is this that gives its single malt whiskey its distinctive, smoky, iodine-like, and almost medicinal profile.

Laphroaig carries the Royal warrant of The Prince of Wales and is the only whisky to do so.

Unsuprisingly coming in strong at the beginning is the peat, with sea water and char. Then it mellows into some fresh grass covered in dew, citrus and though I have never tasted it; what I imagine freshly chipped stone to smell like.

More peat with charcoal and smoke. This would be too much if that’s all it offered but it then mellows into the slightest hint of honey with mandarins that have been in the refrigerator, malt and the very slightest bit of dark chocolate.

Short but definitely not sweet! More smoke and peat with a slightly antiseptic finish. It’s good but it’s the weakest part of a fine dram.

The taste is long lasting and of course, the peat dominates but it is just the right amount for me. It is a complex beast with lots of interesting things happening simultaneously in the mouth.

A great entry level whisky, I enjoy it immensely and it’s one of the first you should try if you are wanting to sample the wonder of the Islays.