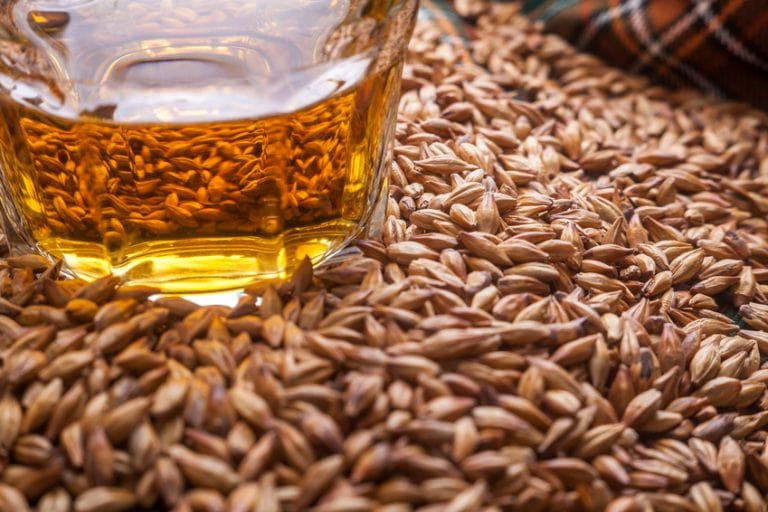 I have recently found out that I have a very mild intolerance to gluten.

I found it quite surprising that I have this gluten sensitivity and only found out by chance after I gave it up as a trial for a couple of weeks to see if a persistent stomach issue I suffer from improved after having been to the doctor several times and eventually being told it was “probably IBS”.

After a few days without gluten the condition did improve considerably and now I am toying with the idea of staying gluten free. As it is only a very mild condition, I may just cut out bread and eat gluten free cereal in the morning, giving up beer may be a step too far for me!

Obviously, one of the first things I researched when I discovered this ailment was the gluten content of whiskey/whisky as I knew giving it up completely wasn’t going to fly at all if my favorite drink contained gluten! It would also have been pretty bad news for this blog.

As you probably know whiskey is made from grain and I was surprised to find that despite wheat, barley and rye all containing gluten many whiskies can legally be labelled as gluten free as the gluten is removed during the distillation process.

This means that distilled alcohol contains below the minimum amount of gluten to be legally labelled as gluten free. It does not mean they are 100% gluten free.

The reason it’s not 100% gluten free is that the distillation process isn’t 100% efficient apparently. This thread on Reddit explains it well.

If you are Celiac or have a strong Gluten intolerance, please do your research and makes sure any whisky listed here is safe for YOU to drink. If you are not sure it is best not to drink any whiskey at all, it’s better to be safe than sorry people your health is more important than anything.

For more information on this topic see: https://www.coeliac.org.uk/information-and-support/your-gluten-free-hub/home-of-gluten-free-recipes/healthy-eating/alcohol/

Never the less, I thought it would be useful to do some research and list some of the big whisky / whiskey / bourbon brands and whether or not they can be classed as gluten free (again if you are allergic to gluten/celiac it is best not to drink them at all).

My process for finding out this info was simple:

I will update this as I get more answers but here are the website info snippets and the replies I received to my e-mails:

“All Jack Daniel’s products including ON7 and flavours are gluten free.”

Jameson is due to triple distillation and also gave a safety reminder that other whiskies may contain some gluten:

“Yes Jameson is Gluten free. Jameson is triple distilled & because we distil three times it allows any traces of the grains to be removed during the distillation process. Whiskeys that have been distilled once for example would not be Gluten free.”

See this thread on Celiac.com where someone has contacted them directly.

I love Glenfiddich so was happy to hear this:

“Happy to report our whisky is indeed gluten free.”

I reached out to the good folks at Buffalo Trace via email and was told that unless the product is specifically labelled as Gluten free it should not be considered so. They directed me to the Sazerac (owners of Buffalo Trace) website which states this information: http://www.sazerac.com/NutritionInfo.aspx

Gluten Free: Yes legally but No in reality

A nice detailed answer from Four Roses. This is basically the correct answer for all whiskey.

“To answer your question regarding gluten, one of the three grains used in the production process of Four Roses Bourbon is Rye, which contains Gluten. However, in the production of Bourbon, the fermented grains undergo a distillation process at very high temperatures which separates the liquids (primarily Ethanol) from the grains (Corn, Rye, and Barley) and water.

This process should denature and/or remove some or all of the Gluten from Bourbon.

We distill once through a column still and again in a doubler (pot still).

Also we add nothing except water after distillation.

Unfortunately there are no government-approved analytical methods to verify the absence of Gluten in Bourbon. Therefore we cannot, under government guidelines, claim that our product is without Gluten or Gluten Free.

In Summary, our product is distilled from grains containing gluten, which removes some or all of the gluten. The gluten content of this product cannot be verified, and this product may contain gluten.”

I received confirmation that Wild Turkey is gluten free but they wisely advised to seek advise before consuming it.

“Wild Turkey does not contain wheat gluten or any other protein.”

I can’t tell from this whether they are officially classed as gluten free but fully agree to exercise caution.

A bit vague as they say scotch whisky rather than talking specifically saying Macallan is gluten free, but we can assume that is what they meant here:

“Scotch Whisky is free from any allergenic material, including nuts, gluten, shellfish.”

Here is the reply from The Glenlivet with sound advice about checking with your doctor first:

“We can confirm that all our whiskies, including The Glenlivet, are suitable for Coeliac sufferers to consume. Although whisky is made using cereals, gluten protein does not pass distillation and cannot be found in the spirit. This is recognized by the UK’s Coeliac Society who advise that distilled spirits, such as whisky, do not contain any gluten and are safe for Coeliac disease sufferers to consume.

However, we would always advise that individuals check with their physician / doctor that it is safe for them to consume alcoholic beverages as in some cases alcohol may increase sensitivity to allergens.” 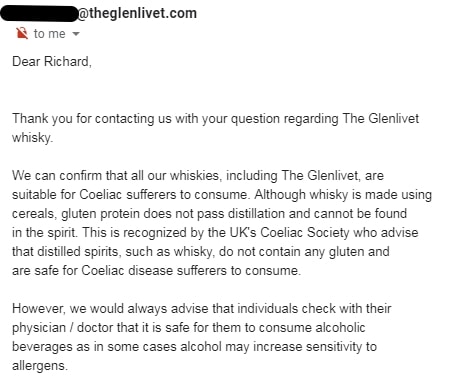 “Our whiskies are gluten free as the gluten proteins are not carried over through distillation.

We don’t add anything after distillation except water and spirit caramel (in very, very rare occasions ) This will also be stated on the bottle if this is so.

The spirit caramel we use is E150a. Sugars for the caramel can be derived from wheat starch, however caramel colour is so highly processed through caramelization that it contains no gluten.

Some celiac’s have been known to still not tolerate some whiskies due to their disease being highly sensitive but our products should not have this effect.”

I emailed them and got the following response:

“I can confirm that Ardbeg whisky is gluten-free – the gluten is removed during the distillation process”.

Gluten free: Yes (but check with a doctor to be sure)

I emailed them and got the following response:

Unfortunately, however, there is currently no validated test to verify the gluten content (or absence) in fermented and distilled products. We therefore encourage you to consult with your personal physician should you have sensitivity to gluten.”. 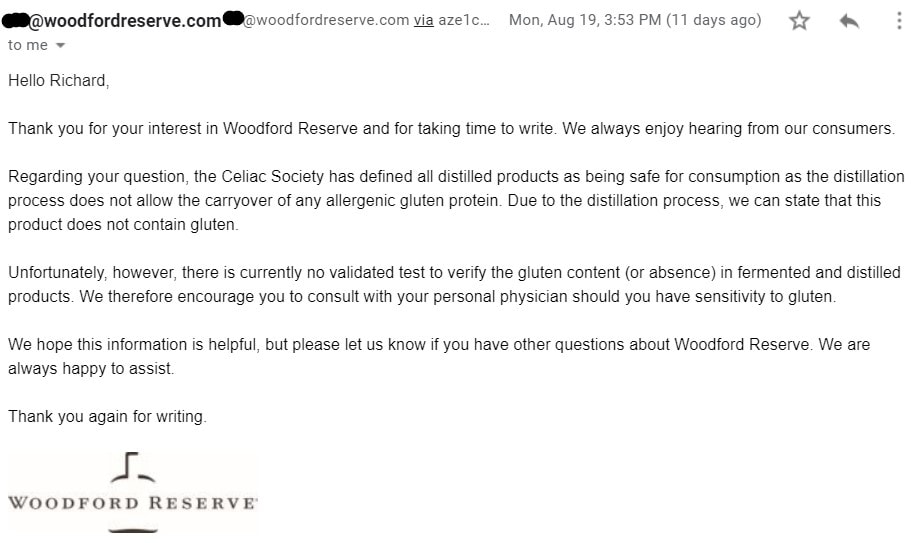 This was the response I got from Balvenie:

“Happy to report our whisky is indeed gluten free.”

Gluten free: Not yet certified.

“At this time we are not certified gluten-free but we are looking into the certification process.”