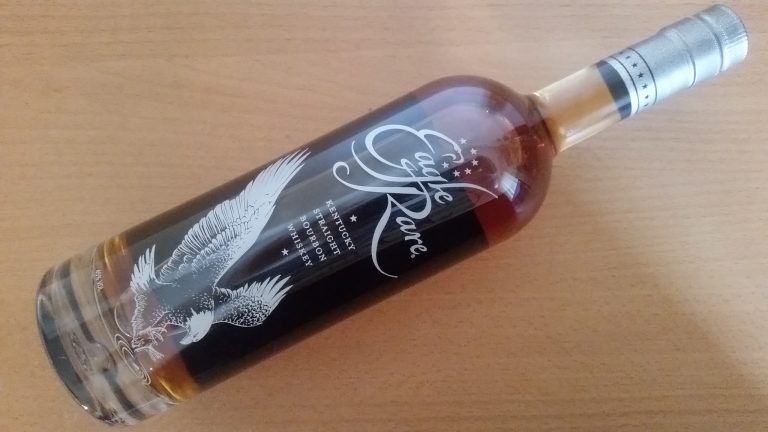 Eagle Rare 10 has been a personal favorite of mine ever since I first started drinking bourbon. It is also almost certainly the coolest looking bottle on the market with that majestic eagle on the front!

Eagle Rare 10 is a single barrel bourbon made by the Buffalo Trace distillery and this offering is basically the standard Buffalo Trace but aged for 10 long years. It uses the number 1 Mashbill, believed to consist of 10% or less rye. The original was a 101 proof bourbon that was produced from 1975 to 2005 by Seagram and then The Sazerac Company and was created by Charles Beam.

Buffalo Trace also put out the Eagle Rare 17 as part of the much-lauded Buffalo Trace Antique Collection (BTAC) and I’m a big fan of that too, I haven’t tried the latest version yet but really enjoyed many previous bottlings..

Considering the original juice is pretty damn good to start with it can only get better after 10 years in a barrel, right? Have a read of my review to find out.

This is what they say on the bottle:

“Eagle Rare 10 Year Old Kentucky Straight Bourbon Whiskey has a sweet, oaky nose and full, complex body. Reminiscent of a fine port wine, this rare whiskey is best served neat, of over ice. Of course, feel free to drink Eagle Rare in such classic cocktails as the Manhattan or Whiskey sour”

A touch of vanilla to kick things off then layers of dark fruit, caramel, honey, corn, a hint of orange, glazed cherries and baking spice. One of the fruitiest bourbons I have tried. Great flavors.

It’s already won me over by the time I get to the finish but it’s fruity again but more like the fruitiness you get from boiled sweets, Jolly ranchers maybe? Or is that just absurd?! A bit of oak and some sweet fudge rounds it off.

I love how fruity this is, you often get slight hints of fruit in bourbons but for me, dark fruits are the dominating flavor in this and that makes it both unique and delicious.

It’s just a very well rounded bourbon and it is very reasonably priced for a 10 year release, meaning it makes a great daily drinker to have on the shelf. It has been known to vary slightly in quality from batch to batch but is generally very dependable.

Also works well as a drink to give newbies and is awesome in a cocktail and not too expensive.

The critics seem to agree that this is a great bourbon as well, it has won countless awards over the years.

It is definitely worth picking up a bottle.