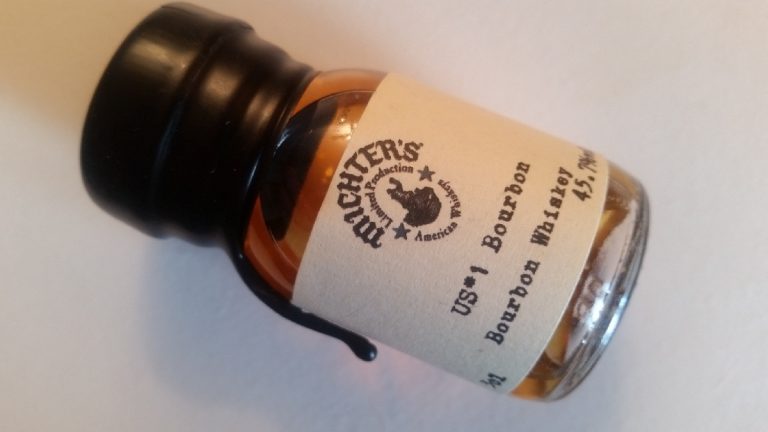 I love Michter’s. They have to be one of my favorite brands of American whiskey. The Michter’s Toasted Barrel Rye is one of my all time favorite whiskeys and both the barrel proof and 10-year rye are excellent (only tried these in bars but hope to get a bottle of each soon to review). I also enjoyed the 10-year bourbon. Not tried the 20-year bourbon or rye but would love to (a bottle of those is a little out of my price range though!).

Quite strangely though I have only previously sampled the upper end of their range and have never tried any of their standard range. This is quite unusual and as usually it would be the other way around. This could cause a slight issue in terms of reviewing the standard offerings as you are comparing to the upper end of the range which can make an unfavorable comparison. I think that may have been a factor when I sat down to review the Michter’s US number 1 Small Batch.

This is made in small batches of a couple of dozen barrels or less and is part of the standard US * 1 Michter’s range which also includes the American Whiskey, Original Sour Mash and a single barrel Straight Rye.

Enough waffle though let’s get down to business:

Caramel and vanilla but kind of watery and weak. It’s all about syrupy and weak. There’s some oak and doughnuts filled with toffee. Tastes young though – needs more time in the barrel and more strength to appeal to me.

Not much. Some toffee, pepper and rye with a slight oakiness. Very short and uninspiring.

As I said at the beginning I think having worked my way backwards from the likes of the Michter’s 10 bourbon and the Toasted Barrel rye meant it was tough to be objective with this one.

Having said that I’m just not keen on it, it’s too weak watery and doesn’t have much character. I could see it being a good bourbon for someone who doesn’t really drink bourbon but maybe enjoys the odd dram now and again.

I wouldn’t even class it as a good daily drinker as there are far better options out there in a similar (mostly cheaper) price bracket. Four Roses Single Barrel and Eagle Rare 10 spring to mind.

In summary, I’d pass on this and get something better for less money!