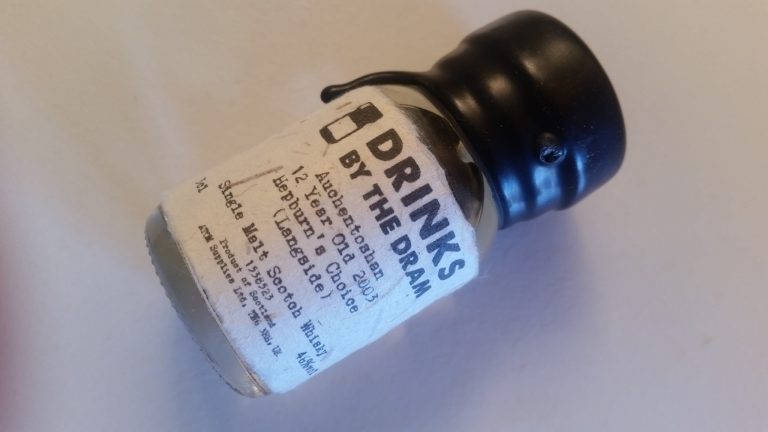 I find Auchentoshan an interesting distillery, all their whisky is triple distilled and they are the only single malt scotch distillery to do this across their entire range. Their whisky also has a distinctive and unique flavour profile.

These are all good points. The slight issue is the unique flavour is a little strange and I can’t make my mind up if I like it or not. I think I kind of do, or do I? I just can’t be sure!

I liked the Auchentoshan 21, the American Oak less so. I want to try the three wood as it’s dark color looks mysterious and intriguing. I guess only when I’ve tried the full offering can I say whether or not I like Auchentoshan.

But you don’t care about that. What is this like I imagine you are asking?

Well, I’m not going to tell you…

Only joking! Got you there friend. Here is my review of the Auchentoshan 12 Hepburn’s choice:

Starts off very sweet when I was expecting fruity. Then you get the melon and peach from the nose with some lemon mixed in for good measure. There’s some custard tart, a hint of apple and some almonds.

The finish is actually quite spicy, with some honey, nuts and a malty finish.

Extremely fresh on the nose then it mixes it up with the sweetness on the palate. Fruity throughout.

It is a little similar to the American oak but better than that, which is a No Age Stated whisky so perhaps not surprising.

To sum up, it won’t blow you away but a very nice one to sip if you fancy something light and fruity.