I picked up a sample of this in the Whisky Exchange shop in Covent Garden, London. For once I went into a whisky shop with no intention of buying a bottle due to some out of control bottle buying last month, but they had a good selection of miniatures and my Girlfriend offered to treat me to one, so of course I obliged her!

They didn’t have an American whiskey that tickled my fancy but there were a few interesting scotches and I went for this because I have seen it before and thought that the colour was really amazing, it looks so dark and mysterious! Also at 60% ABV I knew it would pack a punch. Other than that I didn’t know much about it, I have heard of Glenfarclas but not heard any opinions on this before so it was an exciting one to review.

So without any further ado, here is my Glenfarclas 105 review:

First references to the Glenfarclas distillery were found before 1791. In 1836 it was granted a license. At that time, it was owned by Robert Hay. It was then bought by John Grant in 1865 and today is still owned by the Grant family.

The distillery is located in Ballindalloch, in Speyside, an area around the River Spey. The name “Glenfarclasss” means “valley of the green grass,” and the distillery, comprising of six stills, is the largest on Speyside.

The distinctive taste of Glenfarclas single malt Scotch whiskey is down to the traditional distillation methods that have evolved from the Grant family’s 150-year association with whiskey production, using the crystal clear spring waters that bubble up from the slopes of Ben Rinnes.

Every year, John Grant himself travels to a certain family-owned Bodega in Spain in order to select the best European oak casks in which fine Oloroso Sherry was previously matured. These are then shipped over to Scotland for the final maturation of Glenfarclas single malt whiskey. 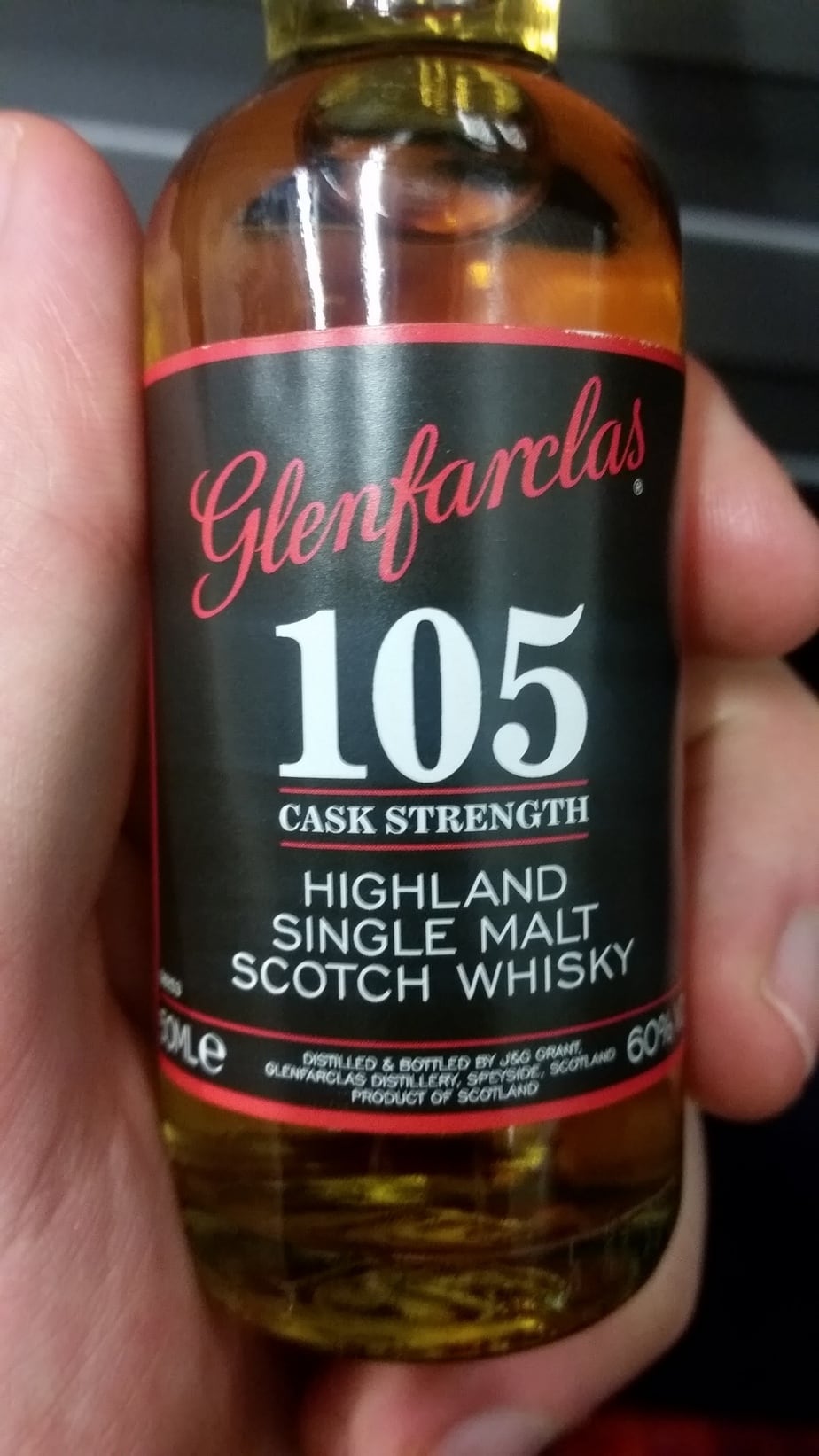 Lots of sherry on the nose with some Christmas cake, a hint of watermelon and some macadamia nuts. It is not overwhelming despite the high proof.

Again lots of sherry hits you off the bat with some stolen and fruit cake, some dried fruits and almonds. it is Christmas in a glass essentially! There is a slight rye spiciness to it which is very enjoyable. A slight sprinkle of very dark chocolate at the end to round it off. Very enjoyable.

More dried fruits and Christmas cake, sweet and spicy with a warming feel.

There is lots of sherry from being aged in sherry barrels but it isn’t too much like some of the sherry cask whiskies I have tried before where the sherriness (according to the spell check that isn’t a word but I’m leaving it in) kind of ruins it.

I think the fact it also aged in bourbon barrels gives it the different kind sweetness that balances it out, in fact on the first sip you almost feel like it will be bourbon-esque but then it whisks you off on a totally different direction.

I really like this and think that the high proof suits it, allowing for the flavours to really make an impression. Would definitely buy a full bottle and would love to try it again at Christmas time in front of the fire.