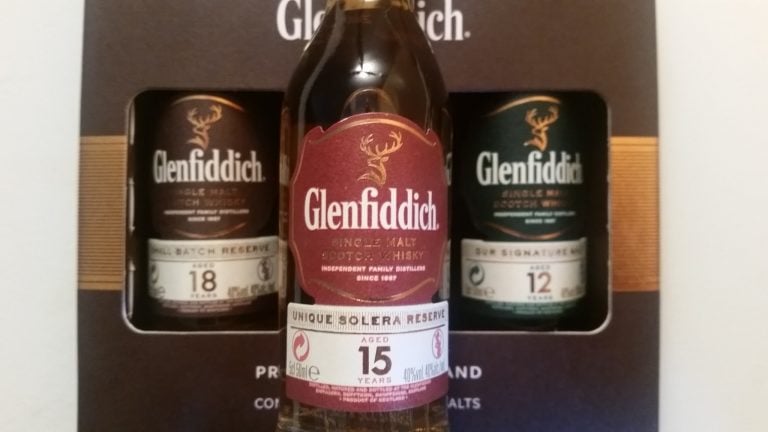 The concept of how this whisky is produced is very interesting. It is first aged in ex-bourbon, ex-sherry and new American oak casks and then transferred into a Solera Vat which is a large oak vessel that is usually used to make wine. The Solera Vat is always kept half full (since 1998) and each year new whisky is added to mix with the ever-aging 50%.

This will mean that there will be some much older whisky mixed in and that the flavour profile will be different each year.

I like whisky with a unique element and this process certainly is that! I’m also a big fan of Glenfiddich and the 12-year standard was the first single malt I ever tried. I also reviewed the Glenfiddich 18 year along with this and liked that too, though those two do not use the Solera Vat.

So what about this one? Have a read of my review of the Glenfiddich 15 Unique Solera Reserve:

“Our Solera Vat is a single malt innovation that marries whiskies matured in sherry, bourbon and new oak casks. Always kept at least half full, it creates a harmonious whisky that gets richer and more complex every year.”

Sherry and oak from the off, with none of the apple and pear notes you get with the 12. Some enticing rum and raisin, maraschino cherry, bananas, amaretto and almonds.

Charred oak with a peppery, spicy, fresh ginger like quality. There is some more cherry but of the dark variety, with a flavour reminiscent of a full-bodied red wine and some pecan nuts at the end.

Dry sherry, malt and brown sugar with a hint of coffee beans.

In some ways, I prefer the profile of the 12 with its fruity, apple flavours, but on the other hand, this has a uniqueness, charm and character that pushed it ahead of it for me. That might sound strange but whisky is about more than just the taste I think and this has elements to it that you don’t find anywhere else.

It is a very good whisky as well, it’s the kind of drink that I wouldn’t have enjoyed that much a few years ago but as my palate has matured and developed I have come to appreciate some of the “woodier” whiskies. It has an ice spice to it and just enough hint of fruit with the cherry.

It’s one I’d recommend trying a sample of before you go out and buy a bottle as it won’t be for some but a great choice for anyone looking for a well-rounded scotch that’s a little different from the norm,