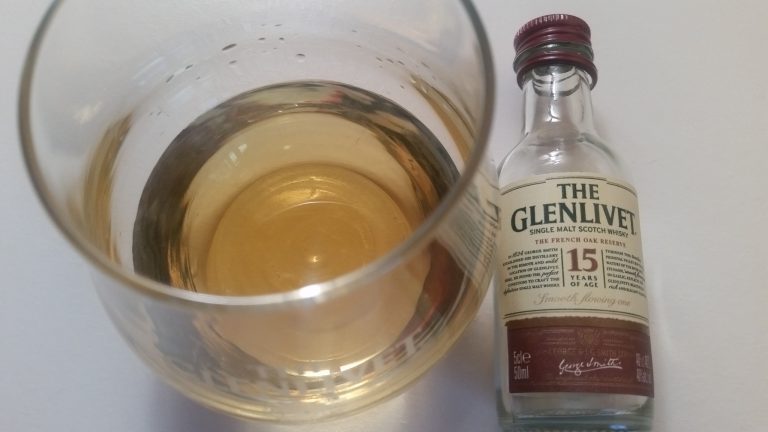 As you will know if you have been reading WhiskeyBon recently, I have been buying 3 packs of miniatures to try and review as many different Scotch whiskies as possible without having to file for bankruptcy!

Next up on this relentlessly tasty journey is The Glenlivet.

I picked up a pack of 5cl bottles which included the Founders Reserve, Glenlivet 15 and Glenlivet 18 and sat down to taste them one after another with my girlfriend who has become rather fond of the tasting sessions and helps me out with tasting notes. So you get 2 incredibly amateurish perspectives for the price of 1!

The Glenlivet is constantly battling it out with Glenfiddich for the best selling single malts in the world and they are quite similar. Which is better though? Let’s find out.

First up is my review of the Glenlivet 15 The French Oak Reserve which is aged in ex-bourbon barrels and then finished in new French Limousin oak casks.

The charming story of Glenlivet begins in Livet Valley, where the founder of the brand, George Smith, learned about whiskey making. Secreted in this hard-to-find valley, Smith learned how to distill the whiskey that was to become World famous. The tale continues with King George IV arriving in Scotland in August 1822 when he is reputed to have asked to try an illegal (as it was then) dram of Glenlivet single malt whiskey.

Over the years, the reputation of the Glenlivet extended far and wide when in London, a certain Charles Dickens wrote to a friend suggesting he try “rare old Glenlivet.” In 1950, the Glenlivet was to account for half of the Scottish malt whiskey sold in the United States.

Nice and fruity with oranges, grapes and candied lemons. More malt and some sherry with floral qualities in the mix too. Brazil nuts and plums round it off. Very pleasant and easy to drink.

As is often the case with 40% ABV whiskies it is very short. Wine gums come to mind with some honey, malt, a touch of vanilla and pepper.

It’s a nice whisky but it lacks character. The Glenfiddich 15 is better in my humble opinion and I would buy that over this.

It is kind of how you imagine a mid-range scotch to taste but that means it is not quite interesting enough for my palate.

Having said that it is a perfectly nice whisky and if you like an easy drinker you could do a lot worse than this. It is also often very reasonably priced for a 12+ year whisky.