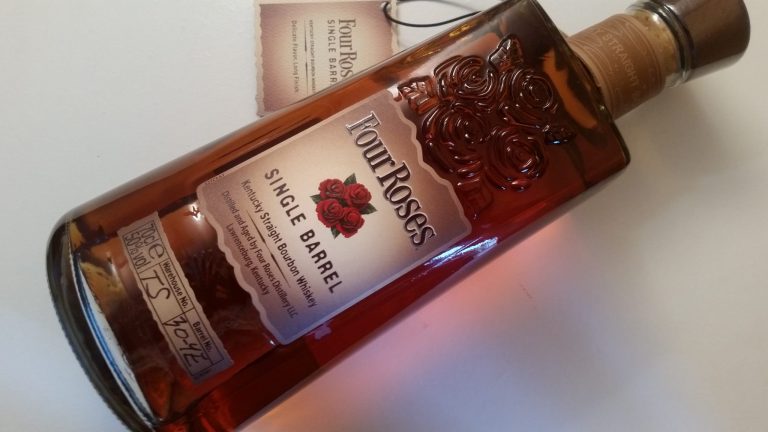 I like Four Roses, they produce quality bourbon at every price level. Right at the bottom end of the spectrum, they have the Yellow Label which while not amazing is better than anything else at the very low price you can often pick it up for.

At the higher price points, they have the Limited Edition range which are delicious and easier to get hold of than some other premium juice (Pappy & BTAC!).

Four Roses have 10 different bourbon recipes which are created with 2 different mashbills and various yeasts. The Four Roses Single Barrrel is from the OBSV recipe. The mashbill is 60% corn, 35% rye, and 5% malted barley.

Let’s find out what I thought of this bottle by digesting the eloquent words of my Four Roses Single Barrel review (please don’t be disappointed that they are not actually particularly eloquent):

According to the owners, Kirin Brewery, the Four Roses bourbon brand was first trademarked in 1888 by Paul Jones Jnr. However, according others, the product was first made and sold in the 1860s. The distillery is located on the Salt River in Lawrenceburg, Kentucky, and is fashioned in the distinctive Spanish Mission style of architecture. It was originally called the Old Prentice Distillery.

The operation also includes a unique, single-story rack warehouse and bottling plant in the peaceful Kentucky countryside at Cox’s Creek.

In recent years, the Four Roses Distillery has undergone significant development with a $55-million investment that got underway in 2015. The aim was to double the production plant’s output. The face of the Four Roses brand of bourbon that the public is familiar with remains that of the impressive, old Spanish Mission style Old Prentice Distillery.

“Only Four Roses uses five yeast strains with two mashbills to create 10 completely different Bourbon recipes. For this Single Barrel product, I always hand select each barrel from the same recipe at the peak of its maturity for its robust and distinctive character. You’ll notice rich aromas of fruit and delicate flavours of apricot and pear balance perfectly with notes of oak, light spice and caramel.”

Cinder toffee and rum and raisin fudge with an oaky spiciness. It is quite dry and peppery but with plenty of sweetness to balance it out. Some vanilla in there too. Not much alcohol burn on the nose.

Heavy on caramel with more cinder toffee and some creamy fudge but all with an enjoyable spiciness from the high rye mashbill at the forefront of the flavor profile. There is some cherry and cinnamon in there too for good measure. This is a very good flavor profile and whilst not super complex you do get a lot of flavors considering the low price this bottle retails at. It’s very enjoyable indeed!

The finale is quite spicy too, a mixture of caramel and peppery rye with a little oak and some creamed corn at the very end.

This is well known for being a great pour for the money and as one of the best pound for pound bourbons you can buy and I wholeheartedly agree with that. It’s got lots of flavors and enough complexity to keep you happy. It’s a perfect bottle to sit on your shelf as a daily drinker. It’s also a good bourbon to share with friends who may not have as refined a palate.

I can’t really think of many other bourbons in the same price range that are as good as this other than possibly Weller 12, Old Weller Antique and maybe Elijah Craig 12 which is being discontinued.

Basically, if you are a bourbon fan you should have a bottle of this in your collection.