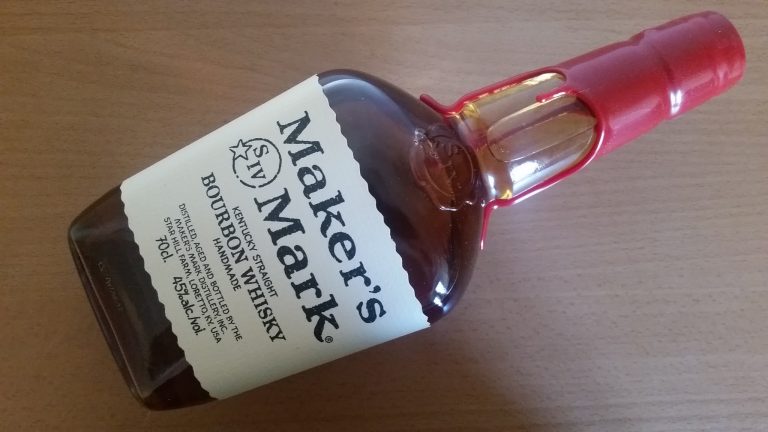 Well, this is an interesting one to review for sure, in the world of Bourbon one can find several brands often mislabelled with the “Iconic” status, we all know which ones they are and you’re not likely to see them reviewed in these pages.

The “icon” of Bourbon that we have Today then is quite a unique one. Makers Mark is perhaps considered the thinking man’s sipping Bourbon. One a Bourbon drinker is expected to have in their cabinet for something to pour without too much ceremony.

A good drinker and a nice choice for those who like to mix, but is this reputation well suited or is this common staple being served an injustice?

Introduced in 1959 Makers Mark is unique in the makeup of its mash in that no Rye is used, instead substituting for Red Winter Wheat to go along with the Corn and Malted Barley, although the makeup is predominantly Corn. To ensure consistency between the barrels Makers Mark rotates them between the top and bottom racks during the maturation.

No exact age is given (NAS) but it’s been revealed it’s around 6 years and only released once tasted. A “small batch” bourbon but this is unlike protected definition statements in that it isn’t regulated in any way to have an agreed meaning. It roughly translates to around 19 barrels at a time so regardless it’s not mass produced in huge batches like some others might be which Makers Mark say adds to its consistency.

Makers Mark bourbon, the brand with the unmistakable red wax seal, first came on the scene in 1958, five years after T. William “Bill” Samuels Snr bought the Burks Distillery in Loretto, Kentucky. During the 60s and 70s, Makers Mark was advertised with the caption, “It tastes expensive – and is.”

On the 31st December 1974, Makers Mark distillery won the distinction of being listed as a historic place on the National Register. Six years later, on 16th December 1980, it became the first U.S. distillery to be acknowledged as a National Historic Landmark while its landmark structures were still operational.

Ownership has changed hands many times. In 1981 it was bought by Hiram Walker & Sons. Allied Domecq then acquired it in 1987. When, in 2005, Pernod Ricard bought the operation, they sold the Makers Mark production facility to Fortune Brands. When they split in 2011, Makers Mark became part of Beam Incorporated, which in 2014, then became Beam Suntory. In 2015, Suntory undertook a significant expansion to the distillery.

Although their famous red wax seal bourbon is bottled at 90 proof, there was a special batch made for export to Japan at 95 proof. These bottles, only a few of which ever appeared in the U.S., had a gold wax seal. 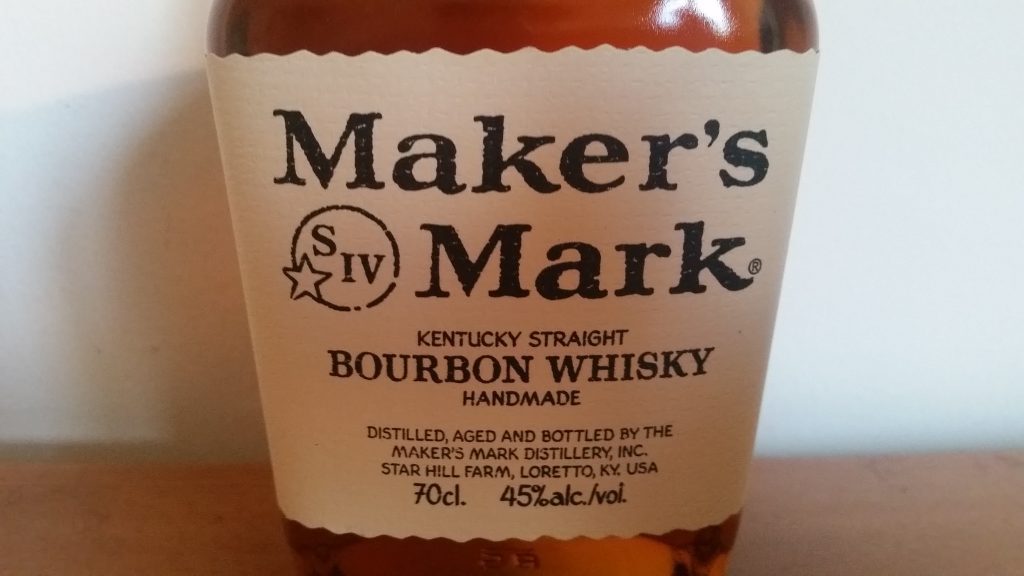 Instantly quite sweet with a caramel depth. Needs to be left to air to allow the strong nail polish remover odour to dissipate.

Quite less substantial in feel than you might expect. It feels more like a good quality Vodka on the tongue than a Whisky which is slightly confusing, not helped by a less sweet taste than you are getting on the nose. Very faintly nutty with toffee and oak in the foreground.
Generally a disappointing feel to it.

Thanks to the thin, watery complexion it doesn’t really go through much in the finish and then a big bang comes in to hit you once again. Unexpected at first but then you come to enjoy it more.

This Bourbon is known the world over for being sat behind a bar and available. It has a true cult following and that can’t be ignored but given the amazing range of other Bourbons and Whiskeys out there these days it feels a little bit like that reputation is based on familiarity alone. The one thing that does save it somewhat is the finish. A nice big punch in the end is sometimes a good thing to have and this delivers there in droves.

Many even die-hard are beginning to question this drinks place given the continued rising cost of it worldwide. It’s hanging on the edge of being reasonably priced and, if you like the feel and live for that big hit finish then it’s going to be absolutely fine for you.

If you’ve grown up with this as a companion then it will always be the welcome friend that you expect but if your palate is more experienced I suspect this might just be too far the wrong side of overhyped for your enjoyment.

Where to Buy Whiskey Barrels