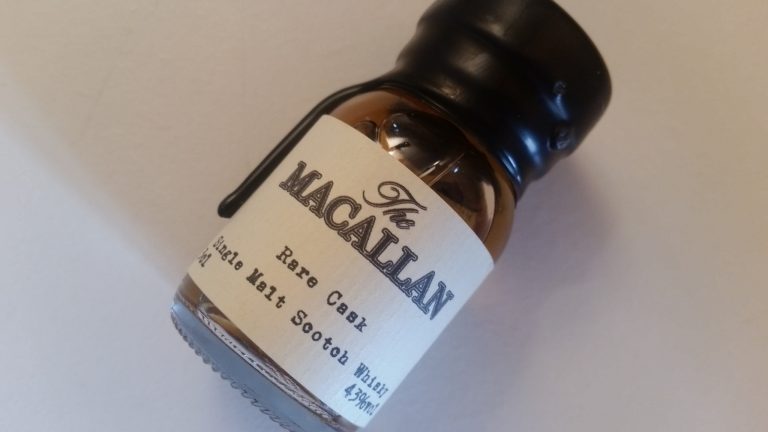 I have always had this view that Macallan is a bit pretentious. Not really sure what that is based on other than I see a lot of bottles going for silly prices form them. It’s not a brand I have explored because of that and in fact as far as I can remember this is the first of any of the offerings that I have tried.

The Macallan Rare Cask uses only sherry casks most of which are first fill casks so it’s likely to be a sherry bomb, which I don’t find that exciting!

The Macallan distillery began its life in 1824 when it was licensed to Alexander Reid under the name of the Elchies Distillery. It was situated close to the River Spey. Towards the end of the 19th century, and expansion of the distillery took place, and it was renamed Macallan-Glenlivet.

After the passing of the  1950s, Macallan underwent a significant expansion. Due to its growing popularity, the Macallan distillery doubled its number of stills in 1965 to 12, It added a further six in 1974 and another five in 1975.

Then, in 1980, the Glenlivet suffix was taken away, leaving the name as simply McCallan.

With the plethora of more modern batches, the older vintages became extremely sought after. In 2007, a bottle of 1926 McCallan was sold by Christie’s for $54,000, and in 2010 a bottle of 64-year-old McCallan in a special Lalique, Cire Perdue” crystal decanter was sold by Sotheby’s in New York for $460,000.

In 2017, a new £100 million distillery with a subterranean design feature was built, opening in June 2018 at a final cost of £140 million. The distillery roof is covered with a blanket of grass and wild flowers to fit into the Speyside environment, incorporating a wave-like design to mimic the nearby rolling hills. Despite the ultramodern distillery, the production of Macallan single malt whiskey is as traditional as ever.

Crafted to showcase complexity and depth, Rare Cask is drawn from the broadest spectrum of casks used in maturation on The Macallan Estate. Hand-picked by our whisky making team, the combination of sherry seasoned American and European oak casks – a high proportion of them first fill – deliver an exquisite and unmistakably woody whisky with a rich hue.

Incomparable access to the most extensive range of cooperages in Spain gives us some of the finest and scarcest casks to choose from to create Rare Cask, which results in a diversity in the finished whisky unlike other Macallan expression. It is the role of the whisky making team to get to know each and every cask in detail, from how it interacts with the spirit to the spectrum of colours it imparts. This relationship between cask and craftsman, spirit and skill, ultimately give us Rare Cask.

With rarity at its core, this is a whisky that will slightly differ in makeup from bottling to bottling; with some casks so rare they will never be used again in any other Macallan. Far less than 1% of casks maturing at the distillery have been identified as fitting to bestow the Rare Cask name – and enable the creation of this multifaceted single malt.”

Very malty with sherry, chocolate cherry liqueurs and Kit Kat wafers, Slightly buttery with some spice at the end.

Very fruity with ripe green grapes, raisins and apples. Honey and a fair amount of sherry with some sugar cane. There’s also a healthy dose of ginger and baking spice in the background. Honey and a hint of cigar tobacco.

Sweet with lots of sherry, malt and honey. Too much sherry on the finish for me. Lingers for a long time.

It’s a decent whisky but there’s just a little too much sherry for my taste which detracts from the other flavours it possesses. It doesn’t seem too young despite being a No Age Statement (NAS) whisky and there are some decent flavours in there but the sherry dominates when at best I only want it in the background.

If you like a lot of sherry however it really is a quality dram that you will enjoy for sure.