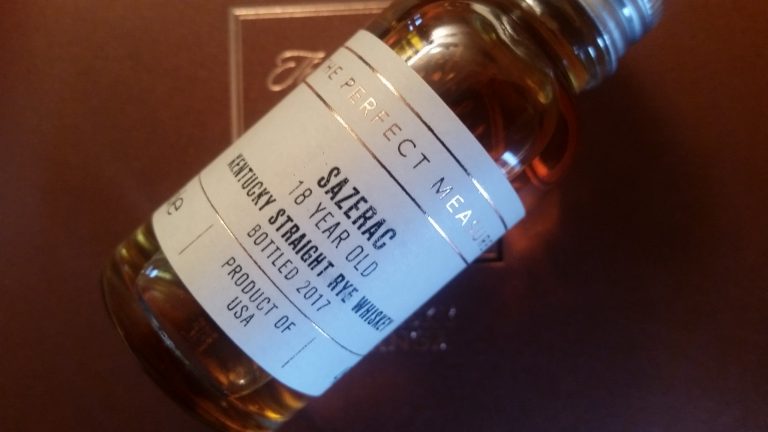 First up for review from the 2017 BTAC is the Sazerac 18 which is the big brother of one of my favorite whiskeys the Sazerac Rye aka Baby Saz. That lovely little drop is around 6 years old so this has been in the barrel 3 times as long. The thing I love about Sazerac Rye is its distinct taste, it’s one of those whiskeys I know for sure I could pick out easily at a blind tasting. It has a rich almost sickly sweetness too it that I just love.

As you probably know Buffalo Trace releases their Antique Collection every year and it is one of the most hotly anticipated events on the American whiskey calendar. This is one of 5 whiskeys that are a part of it.

But let’s forget the others for now and take a look at my review of the Sazerac 18:

Rye spice, creamy toffee, crème brulee and some clove. Cinder toffee and ginger. Sweet dominates the plater but it is not as sickly sweet as the baby Saz but sweet enough and with more flavors coming in to play. It’s delicious.

Peppery rye, white pepper and hints of toffee. Not the greatest finish and lets it down a bit.

An excellent drink. I know some people didn’t think too much of this, the general consensus seemed to be that it was a slight improvement on the 2016 offering but nothing to write home about. I also think some people just prefer the higher proof big boys of the BTAC range such as the George T Stagg and the WL Weller.

I don’t agree, I think it’s tremendous and offers a uniqueness in its creamy sweetness, similar to the standard Sazerac Rye. The crème Brulee and creamy toffee dominate which I love.

Word of advice, you absolutely must leave this to rest in the glass for 5 minutes or so to get the true flavors, it changes drastically. Sweet and spicy in perfect harmony, if I could find a bottle of it at retail pricing I would snap it up, unfortunately, that is unlikely to happen.

We earn a small commission if you click the above link and go on to make a purchase. This helps us to run the website and buy more bottles to review for you. Our opinions are unaffected by this, if we don’t rate the whiskey we will say so. This does not affect the price you pay.