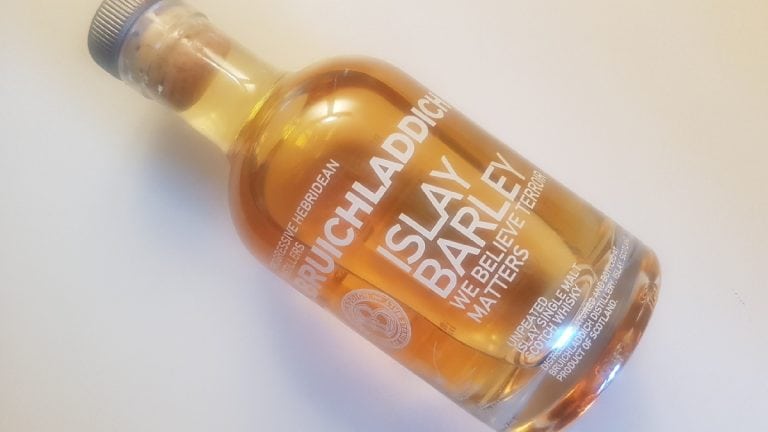 Here we are at my final review of the Bruichladdich mini-series which has also taken in the Port Charlotte and Classic Laddie.

Before these 3 I had never had anything from Bruichladdich before and I have to say I am now a fan of the brand. It’s a well thought out and highly stylised brand which I admire and they also put out quality whisky. The other two were good but didn’t blow me away so lets see what the Islay Barley has to offer. Jump on my review my friend:

The Bruichladdich distillery was built by John, Robert, and William Harvey, on the Rhinns of the Isle of Islay in 1881. The Harvey family previously owned two distilleries in Glasgow. They used an inheritance to construct the third, Bruichladdich.

Unlike the other older distilleries on Islay, which were developed from old farm buildings, the Bruichladdich distillery was built with stones from the seashore. It incorporated unique, tall, bottle-necked stills, which produce a more pure and original spirit, unlike those produced by the other older farm distilleries.

In May 2001, the distillery was dismantled and reassembled but kept most of its original Victorian decor and equipment, most of which is still in use today. Distilling is done without the help of computer control and relies entirely on the skill of the artisans the company employs.

“It was created with spirit trickle-distilled from barley grown in the fields of our remote Scottish island home. For us it is the land incarnate, our passionate belief in the power of barley made manifest. Land and dram united.”

Smells like an Islay albeit quite light on the peat and smoke. Sweet and fruity, reminds me of fruit pastilles. Notes of orange, lemon and pineapple fruit sweets.

Barley, apples lemon tarte. A little briny and some smoke with a nice mouthfeel. There is some mango in there and something a little bitter that I can’t quite put my finger on.

It’s quite tasty with some nice flavours and a very pleasant mouthfeel. It benefits from the 50% ABV.

There is nothing too complex or anything outstanding about it though, everything is just good – a solid dram. I’d prefer a bit more of the Islay smokiness from it which would “pep2 it up a bit in my humble opinion.

Don’t think I will buy a full bottle of this but I will enjoy the rest of the 200ml one I have. I preferred the other two I reviewed from Bruichladdich, the Port Charlotte and the Classic Laddie.