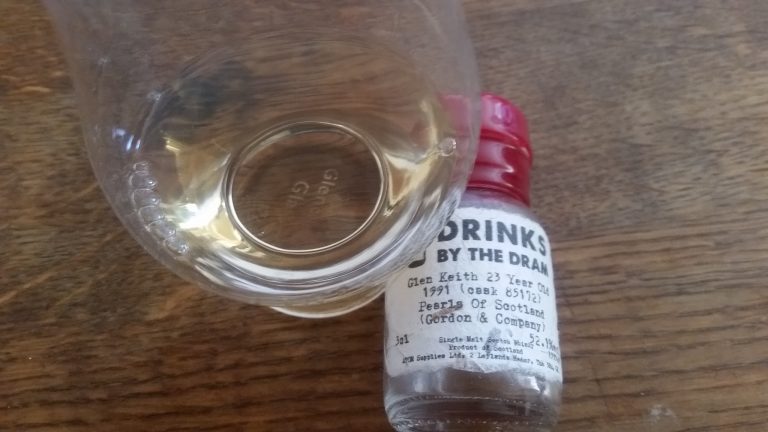 Glen Keith is just a baby in terms of Scottish whisky distilleries having opened in 1958. It has mainly been used for contributing single malts to blended whiskies such as Chivas Regal, it was built by the Chivas Brothers for this purpose and was owned by them until Pernod Ricard bought the brand in 2001.

They have also put out several whiskies under the Glen Keith name however, mainly during the 90’s. Other than a 10-year expression these bottles are pretty damn rare so I was excited to try this 23-year old that relatively few people will have tasted before. Have a read of my review of the Glen Keith 23, which was released in 1991 to find out:

It has a classic Speyside profile with honey, citrus, apricots, malt and a sprinkle of pepper. There is a dustiness to it but it’s a good characteristic, like dusty old decking on a sunny day.

There’s an aggressive alcohol burn which isn’t surprising given that it’s 52.1% ABV, it is not too much for my taste though and adds to the character of the whisky. Loads of spice and pepper. Then the honey kicks in. There’s some cereal, like a bowl of cornflakes without the milk and an earthy goodness to it.

The finish lets it down a bit, there’s honey and wood but a bit of an astringent final taste.

A really interesting whisky, I love trying something rare as you join a fairly exclusive club who have had the privileged to try something most people haven’t and that adds to the character of a good whisky.

The high proof on this (for a scotch) really opens up the flavours and it’s strong and bold and it’s as refined as you would expect from its 23 years in the barrel.

I’ve no idea what a bottle would cost if you could find one but I would definitely buy one if so.