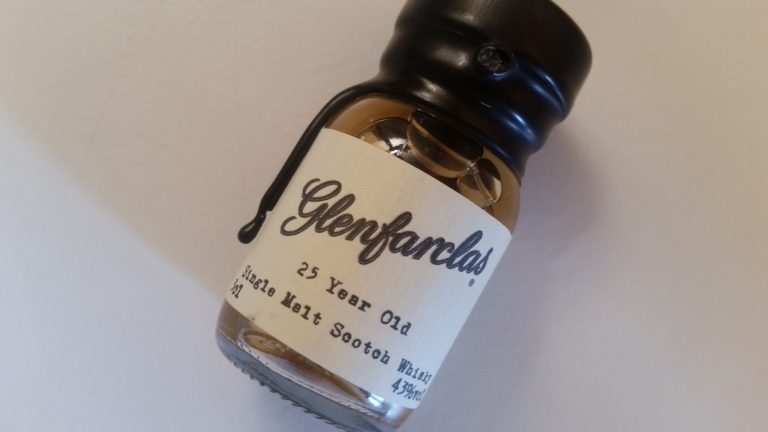 A few months back I reviewed the Glenfarclas 105 cask strength and enjoyed it thoroughly. From that, I got a lot of Christmas cake flavours and word on the grapevine (does “grainvine” work or is that a bit shit?) is that this 25-year expression also packs a Christmassy punch. This one is only 43% ABV however so it’s not going to be as potent as that but 25 years in oak has got to caress some fine flavours into the juice right?

The Glenfarclas distillery is a family run business by the River Spey in Ballindalloch, Scotland. It is an independent distillery that is owned and run by the Grant family since being purchased by John Grant in 1865. That is fairly unique in today’s whisky industry as most distilleries are owned by large companies these days. Glenfarclas are also well know for their use of sherry casks to impart a sherried flavour to their whisky range.

But enough of this waffle, time for the good stuff. You have come here for the beans and I’m about to spill them, read on to find out what I thought of the Glenfarclas 25 year old:

First references to the Glenfarclas distillery were found before 1791. In 1836 it was granted a license. At that time, it was owned by Robert Hay. It was then bought by John Grant in 1865 and today is still owned by the Grant family.

The distillery is located in Ballindalloch, in Speyside, an area around the River Spey. The name “Glenfarclasss” means “valley of the green grass,” and the distillery, comprising of six stills, is the largest on Speyside.

The distinctive taste of Glenfarclas single malt Scotch whiskey is down to the traditional distillation methods that have evolved from the Grant family’s 150-year association with whiskey production, using the crystal clear spring waters that bubble up from the slopes of Ben Rinnes.

Every year, John Grant himself travels to a certain family-owned Bodega in Spain in order to select the best European oak casks in which fine Oloroso Sherry was previously matured. These are then shipped over to Scotland for the final maturation of Glenfarclas single malt whiskey.

A sherry and Christmas cake bomb from the off with some candied orange, rhubarb, honey and a hint of sourdough bread. Raisins, cinnamon and that white pepper again that you don’t usually find in a Speyside, it’s a good thing though gives it some bite.

Quite short with more sherry, some malt and a creamy quality. Raisins at the end then fades away.

I’m not a huge fan of heavily sherried scotch as a whole but I really enjoyed this. Lots of depth of flavour and that really enjoyable Christmas cake flavour profile but with some fairly intense pepper that gives it a kick and makes it unique.

I’d love to pick up a bottle of this in time for Christmas I can see myself sat in a comfortable chair after the big dinner, sipping a couple of drams at the end of the day to round off the festivities in style.

It is also very reasonably priced in most places for a 25-year-old whisky which is an added bonus.