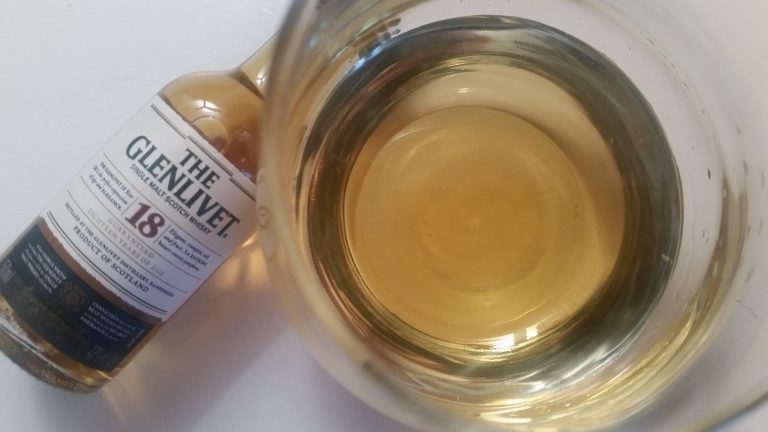 Here it is, the last in my series of reviews of The Glenlivet range and I’m not ashamed there were a few small tears forming in the crescent of my eye while I tasted this on. Not too many though as the thought of the Founders Reserve was still fresh in my memory (shudder!).

The Glenlivet 15 was half decent though so I was excited to see what this had to offer. I like the fact that this is 43% as the other two were slightly lacking in oomph.

I have also enjoyed the oldest whiskies I tried of both the Balvenie (Balvenie 17) and Glenfiddich (Glenfiddich 18) range so I was optimistic for this one.

So… without any further ado here is my review of The Glenlivet 18:

The charming story of Glenlivet begins in Livet Valley, where the founder of the brand, George Smith, learned about whiskey making. Secreted in this hard-to-find valley, Smith learned how to distill the whiskey that was to become World famous. The tale continues with King George IV arriving in Scotland in August 1822 when he is reputed to have asked to try an illegal (as it was then) dram of Glenlivet single malt whiskey.

Over the years, the reputation of the Glenlivet extended far and wide when in London, a certain Charles Dickens wrote to a friend suggesting he try “rare old Glenlivet.” In 1950, the Glenlivet was to account for half of the Scottish malt whiskey sold in the United States.

“The Glenlivet 18 Year Old is the perfect expression of age and elegance. Elegant, complex oak and fruit. An enticing bitter-sweet symphony.”

It’s delicious. Sweet caramel and honey up front then some malt, pears, figs vanilla and cherries all underpinned by sherry. The sherry is subtle though and not overbearing (I’m not a big fan of too much sherry).

Ginger and dried apples with oak some tannins and more sherry.

Despite being slightly higher ABV than the other two it is still incredibly light but it is on a good way and it’s also very warming and soothing at the same time.

A very good whisky it’s on a par with the Glenfiddich 18 but I do slightly prefer the Balvenie 17. Still though I would definitely recommend picking up a bottle of this.