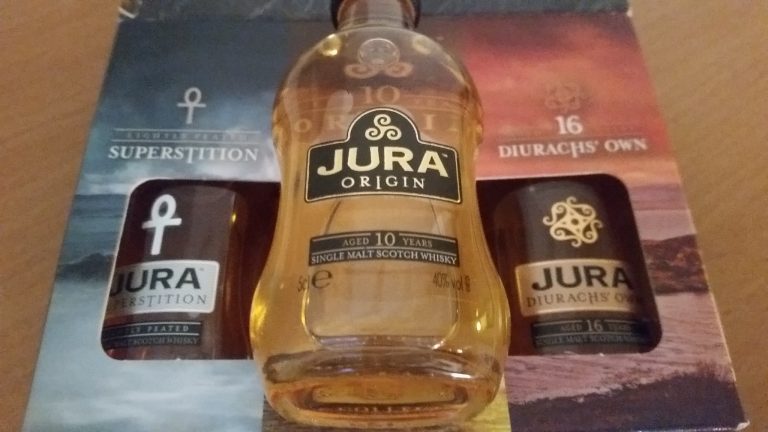 This was the second one I sampled from the set of 3 Jura miniatures I purchased, the other two being the Jura 16 Diurachs’ Own and the Jura Superstition but it is the last one I’m writing up so there isn’t much left to say about Jura in the intro that I haven’t already said.

Basically, is a small Scottish island and the Jura Distillery takes its name from that.

There were descriptions of each whisky on the box with this one being labelled “Light and delicate with a warming honey finish”. Now that description doesn’t really sound like my bad and the other two intrigued me more. But despite my initial description-based indifference I did what a good whiky review does and drank it anyway so that I could bring you this review. Without any further inane rambling, here is my review of the Jura 10 Origin:

“Origin is the whisky that begins the Jura journey. For that reason each bottle carries the traditional Celtic symbol for birth, beginning and the forces of nature. Slumbering for a full decade in quiet contentment, this beginning spirit has a lingering taste of warming gentle oak, notes of honey and caramel, soft liquorice and roasted coffee beans.”

The slightest spice, toffee nuts, dried peaches some dark chocolate coated almonds. It’s not bad but having had the Diurachs’ Own just before I can’t help but compare it to that and it lacks complexity in comparison.

Malty with a hint of Liquorice Allsorts and sweets. Very short.

An enjoyable nose and decent drinker but quite a way behind the 16 Diurachs’ Own. It is like that person you know who is really nice and unassuming but when it comes down to it they are just not very interesting. I also preferred the NAS Jura Superstition as it has bit more character.