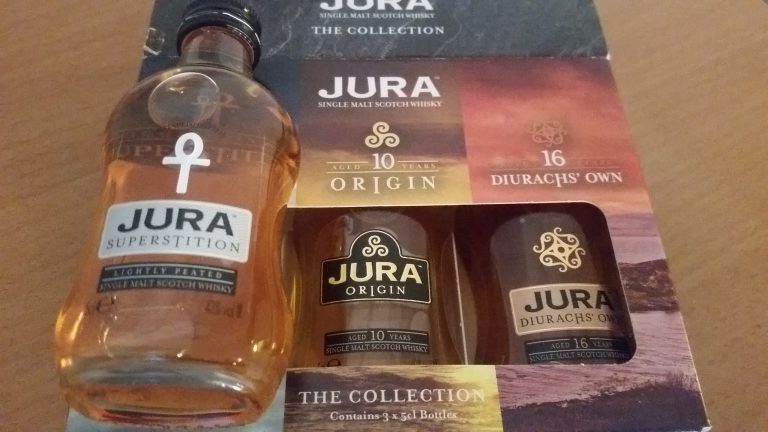 After buying a rather cute little box of Jura miniature and sitting down to review them one after another I decided on the order Jura 16 Diurachs’ Own first, then the Jura 10 origin and this little beauty was the last one. My thinking was that I did want to start with a peaty one as it may overpower the other two afterwards. Is there a logic to that? Possibly.

There is no age statement for this unlike the other two it is a blend of different aged whiskies with no minimum age stated which means it could be quite young and I’m a little more suspicious of NAS scotch than I am of, say bourbon, for example. It is labelled as “lightly peated” so should be interesting as the first two I tried were not at all and were very light. I do like a peated whisky.

Jura is a small island off the west coast of Scotland and the Jura distillery is owned by Whyte and Mackay, which is owned by Emperador Inc.

Anyway let’s get down to the good stuff, here is my review of the Jura:

“The Ankh cross is an ancient Egyptian symbol rumoured to bring good fortune – as long as you pour the whisky correctly by holding the cross in the centre of your palm. Crafted from a selection of the finest aged Jura single malt whiskies, this mysterious spirit has a unique style and character, with tastes of spice, honey, pine and peak with a whisper of smoke.”

Peat and smoke on the old nozzle with some honey, cloves, dark chocolate and citrus.

Dark chocolate up front, sweet rose petals and prune juice, with ginger, honey and Crunchy Nut Cornflakes. The smoke on the nose is much more subdued which is surprising.

Cinnamon, honey and citrus with a hint of spice.

Strange one, from the nose you think it is going to be Laphroaig 10 esque but that isn’t how it turns out at all, it’s much sweeter and fruitier like the 10 Origin and the 16 Diurachs’ Own.  I like a peaty monster so I was a little disappointed by that but you get things from this that you don’t find in the peatier peateds I’m aware that both those word don’t exist btw!). My girlfriend loved this and she doesn’t like peat monsters but enjoyed the subtle hints that this has.

All said on done, I did enjoy it and would put it a close second to the Jura 16 and way above the 10 which I wasn’t a big fan of.