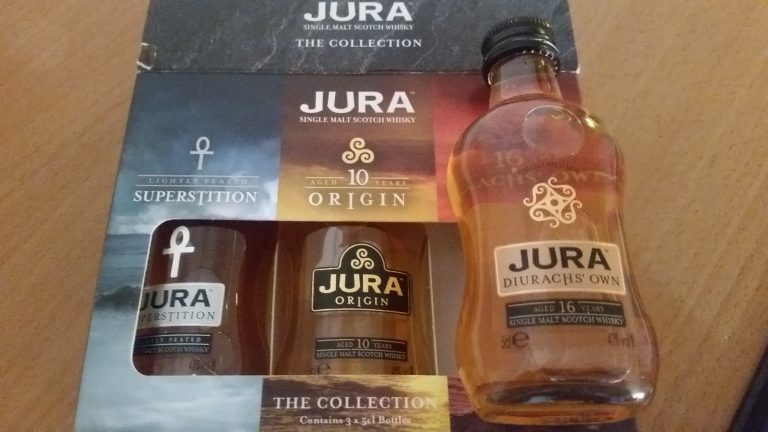 As you probably know having a love of whisky is not very wallet friendly! The idea with WhiskeyBon is to bring you as many reviews of whisky from around the world as possible. There’s only the two of us though and the money comes out of our (never very full) pockets.

For this reason, I thought it would be a good idea to get some of the miniature packs on offer rather than buying a full bottle every time. This also has the benefit of not landing us with an entire bottle to finish if we don’t like it!

The first box of miniatures I spotted was a Jura one containing the Jura Superstition, Jura 10 Origin and this Jura 16 Diurachs’ Own (Please don’t ask me how you pronounce that).

The Jura Distillery gets its name from the island of Jura off the West Coast of Scotland near the Islay region.

I decided to kick off with this one because it’s the oldest. But is it the best? Why don’t you have a read of my review of the Jura 16 Diurachs’ Own to find out:

“Nurtured for sixteen long years, this is the whisky of choice for the people of Jura. To honour this special relationship, the symbol of the Diurachs adorns each and every bottle. Flavours of dark chocolate combined with oranges and spices leave a sweet toffee and honey finish.”

Sweet honey, a touch of oak then some dry sherry and dried fruits. A smidge of candied orange. Some intense flavours with a wonderful freshness and incredibly smooth.

Really light and short. Citrus, some oak and sweet sherry.

A great whisky that’s quite unique. The thing that stands out the most is the freshness factor, which may sound a bit silly but you will know what I mean if you try it.

It’s also quite fruity and lemony which is nice and for being aged in sherry casks, the sherry factor is not too strong which is good for me because I’m not a fan of the “sherry bombs”. Recommend this if you are looking for something unusual to try.